Zambia is a landlocked country with ten provinces that was once a British colony. Angola, Botswana, Zimbabwe, Mozambique, Mali, Tanzania, and the Democratic Republic of the Congo border the country in Southern Africa. Lusaka, Copperbelt, and Eastern are the most important provinces. Zambia covers 752,618 square kilometers of land. This places it as Africa's 17th largest country. It has a tropical climate that barely varies with altitude. It has a high plateau with some hills and mountains as its terrain. Zambia's population totals more than 17.3 million people. This places it as Africa's 22nd most populous country. Lusaka, the country's capital and largest city, has a population of about 2.7 million people. Kitwe, Ndola, and Kabwe are the other important cities. Kenneth Kaunda International Airport (LUN), which is named after the first President Kenneth Kunda and serves 1.3 million people annually, is the largest airport. Zambians can fly to places in Africa and Turkey from this airport.

A diverse range of languages and tribes have affected Zambian culture. Although there is no official language, Bemba is by far the most widely spoken. The legal system is founded on common and customary English law. A presidential republic is the government type. Every five years, presidential elections are held, with the president being elected directly by the people.

The Zambian kwacha (ZMW) is the country's official currency. The country has an open economy, with a GDP of $75.8 billion dollars. Its residents have a $4,148 per capita income. Agriculture, industry, and services are the three main industries that make up the GDP. Zambia has one of the world's fastest growing economies, with annual growth rates exceeding 6% in recent years. Copper, emeralds, corn, rice, sunflower seeds, flowers, and coffee are also important exports. The majority of it is exported to neighboring countries.

Zambia has a wide range of tourist locations and attractions, both urban and nature. It is recognized for its diverse wildlife and numerous national parks that are easily accessible. There is one UNESCO world heritage site in the country. Siavonga, the Mosi-oa-Tunya National Park, the Kasanka National Park, Livingstone, the Nsumbu National Park, the Capital Lusaka, and the Blue Lagoon National Park are just a few of the prominent sites. Every year, more than 1.1 million tourists come to the country. The vast bulk of them come from the surrounding countries. 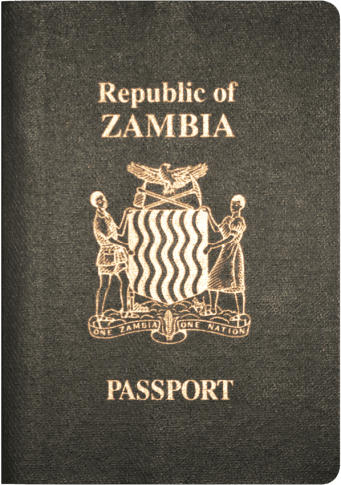 According to the SovSpot Passport Ranking Index, the Zambian passport is now ranked 74th. It allows visa-free travel to 71 countries. This results in an overall mobility score of medium-low. Visa-free travel and visas on arrival are available to Zambian passport holders in countries such as Malaysia, Senegal, Singapore, and Ecuador. Zambian citizens require a visa to visit 158 countries across the world. The United States, the European Union, the United Kingdom, and Japan are among the countries that require a visa ahead of time.