Vietnam is a former French colony now known as the Socialist Republic of Vietnam. It has 58 provinces and is located in Southeast Asia. Cambodia, Laos, and China share its boundaries. Ho Chi Minh City, Hanoi, and Thanh Hoa are the most important provinces. With a total area of 331,212 square kilometers, Vietnam is Asia's 19th largest country. It has a tropical climate in the south and a monsoonal climate in the north. Mountains in the north, central highlands, and flat deltas characterize the topography. There are over 96.2 million inhabitants in the country. Hanoi is the country's capital. Ho Chi Minh City, however, is the most populous city, with almost 9 million residents. Haiphon, Da Nang, and Can Tho are also prominent cities in the country. Tan Son Nhat International Airport is the largest (SGN). It has an annual passenger volume of around 36 million people. Then there's the Noi Bai International Airport (HAN). They link the country to places throughout Asia and the rest of the world.

In 1956, Vietnam declared independence from France. Its culture is influenced by Confucianism, Mahayana Buddhism, and Taoism, as well as French influences. The bulk of the population is unaffiliated with any religion. Vietnamese is the country's official language. The legal system is a blend of civil and common law. The government is set up in the form of a communist state with elections every 5 years.

The Vietnamese dong (VND) is the country's official currency. Vietnam has a planned economy with a gross domestic product of $770 billion dollars. As a result, it is Southeast Asia's fifth largest economy. It has a $8,066 per capita income. Services and industry are the two main contributors to GDP. Textiles, clothes, shoes, rice, coffee, rubber, and tea are the country's principal exports.

Vietnam is a well-developed tourist destination with a diverse range of activities. It is noted for its natural beauty and UNESCO world heritage sites. Halong Bay, Ho Chi Minh City, Hue, Phong Nha-Ke Bank National Park, My Son, Hoi An, and Hanoi are just a few of the important locations. Vietnam is growing in popularity as a tourism destination. The majority of the 18 million tourists who visit each year come from nearby Asian countries, the United States, and Europe. 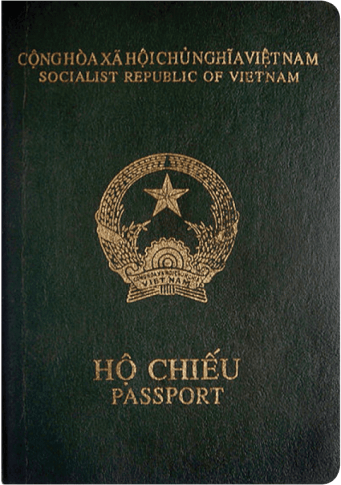 According to the SovSpot Passport Ranking Index, the Vietnamese passport presently ranks 92nd. It allows visa-free travel to 52 countries. Visa-free travel and visa-on-arrival are available to Vietnamese passport holders in countries such as Indonesia, the Philippines, Chile, Sri Lanka, and Thailand. Visas are required for entry into 177 countries throughout the world, including China, Turkey, Russia, the United States, and the whole European Union. Because of the high visa requirement, the mobility score is poor.