Venezuela is your destination

Venezuela's Bolivarian Republic is made up of 23 states and one capital district. It's in the northwestern part of South America. Brazil, Guyana, and Colombia are the country's neighbors. Zulia, Miranda, and Carabobo are the most important states. Venezuela covers 916,445 square kilometers of land. As a result, it is South America's sixth largest country. The central plains, lowlands, and Andes Mountains make up the landscape. Its climate ranges from tropical hot and humid in the lowlands to more temperate in the highlands. There are more than 28.8 million inhabitants in the country. Caracas is the country's capital. It is also the most populated city, having a population of almost 2.2 million people. Maracaibo, Valencia, and Barquisimento are all prominent cities. With 5 million passengers per year, Simon Bolivar International Airport (CCS) is the country's busiest airport. Simon Bolivar, a freedom fighter, is honored with the airport's name. The airport is connected to the rest of the world. It also serves as a crossroads for Central and South America.

The culture of Venezuela is influenced by a blend of Spanish, African, and indigenous civilizations. The main religion is Roman Catholicism. The country's official language is Spanish. The civil code of Spain serves as the foundation for the judicial system. A federal presidential republic is the government type. President Nicolas Maduro is the country's head of state and government. Every six years, elections are held.

The Venezuelan bolivar is the country's official currency (VEF). The country has a semi open economy, with a GDP of roughly $204 billion. This places it as South America's ninth largest economy. Its residents have a $7,344 per capita income. The GDP is primarily composed of two primary sectors: services and industries. Oil, livestock, machinery, corn, sugarcane, rice, and bananas are the principal exports. Oil accounts for nearly all government revenue and accounts for half of the country's GDP.

Venezuela has a wide range of tourist attractions, both urban and natural. The country boasts three UNESCO world heritage sites as well as several historic and colonial structures. Angel Falls, the Los Roques Archipelago, Isla de Margarita, Parque Nacional Morrocoy, and Roraima are also popular tourist spots. Venezuela is a popular tourist destination because of its rich culture and friendly people. Every year, more than 700,000 tourists come to Venezuela. The bulk comes from neighboring countries as well as the United States. Due to a massive economic recession that is affecting all sections of the country, this number is anticipated to decrease in the future. 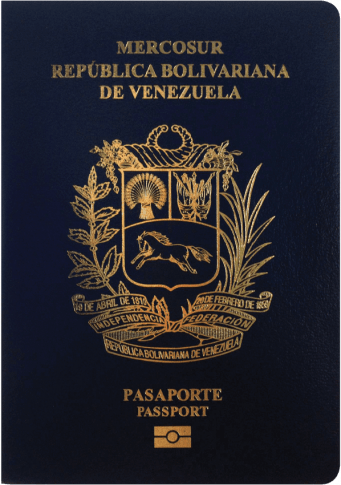 According to the SovSpot Passport Ranking Index, the Venezuelan passport is presently ranked 45th. It allows entrance to 128 countries without requiring a visa. Visa-free travel and visa-on-arrival are available to Venezuelan passport holders in countries such as the Philippines, Singapore, Russia, Turkey, and the entire European Union. Venezuelan citizens, on the other hand, need a visa to visit roughly 101 countries around the world. China, India, and the United States are among the countries that require a visa. The passport mobility score is a medium score.