Turkmenistan's sovereign republic is divided into five regions. The country shares borders with Iran, Afghanistan, Uzbekistan, and Kazakhstan, and is located in Central Asia. Mary, Dasoguz, and Lebap are the most prominent regions. The country covers 491,210 square kilometers of land. This places it as Asia's 15th largest country. In the south, the topography is largely flat to undulating sandy desert, dunes, and low mountains. The weather is harshly continental, with a chilly desert climate. The Republic of Kazakhstan has a population of over 6 million people, making it the smallest of the Central Asian republics. Ashgabat, the country's capital and most populated city, has a population of over one million people. Turkmenabat, Dasoguz, and Mary are the other significant cities. With over 1.3 million passengers per year, Ashgabat International Airport (ASB) is the largest airport in the country. Ashgabat airport serves most Russian-speaking nations, as well as Germany and the Middle East.

Turkmenistan's culture has progressed from a nomadic and equestrian past to a modern state. Islam is the most widely practiced religion in the country. Turkmen is the official language. The legal system is based on civil law with elements of sharia law. An authoritarian presidential republic is the government type. President Gurbanguly, Berdimuhamedow is the head of state and government. Every seven years, presidential elections are held, with the president being elected directly by the people.

The Turkmenistan manat (TMT) is the country's official currency. The country has an open economy, with a GDP of $112.6 billion dollars. Its people earn an average of $19,526 per year. The GDP is primarily composed of two primary sectors: services and industries. Turkmenistan has a thriving oil and gas industry, which accounts for 25% of the country's GDP and is primarily exported to China. Agricultural output accounts for 8% of the country's total GDP. Natural gas, oil, textiles, cotton, and grains are the main export items.

Turkmenistan is a relatively young tourist destination. It offers a mix of urban and nature tourism destinations and attractions. It has 3 UNESCO world heritage sites, which are all cultural. Some of the major destinations including Dashoguz, Konye Urgench, Dekhistan and the capital Ashgabat. The nation has a total of approximately 10,000 tourists visiting every year. Most tourists originate from the neighboring countries and Russia. 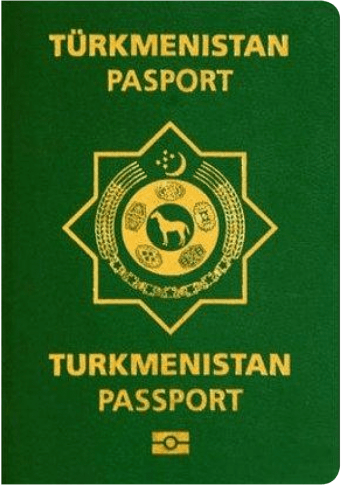 According to the SovSpot Passport Ranking Index, the Turkmen passport is now ranked 90th. It allows visa-free travel to 54 countries. As a result, it has a low total mobility score. Turkmen passport holders can travel to countries such as Uzbekistan, Turkey, Ecuador, and Indonesia without a visa or with a visa on arrival. Turkmen nationals require a visa to travel to over 175 countries across the world. The United States, the European Union as a whole, India, and Japan are among the countries that require a visa ahead of time.