The Land of Kilimanjaro, Zanzibar & the Serengeti

The United Republic of Tanzania is made up of 21 regions and was once a British colony. Kenya, Malawi, the Democratic Republic of the Congo, Zambia, Burundi, Rwanda, Mozambique, and Uganda are all neighbors in Eastern Africa. Tanzania covers 947,303 square kilometers of land. This places it as Africa's 13th largest country. It has a temperate temperature in the hills and a tropical climate along the shore. Plains near the coast, a central plateau, and highlands in the south and north characterize the geography. Tanzania's population totals more than 56.3 million people. This places it as Africa's fifth most populous country. Dodoma is the country's capital. Dar es Salaam, however, is the most populated city, with a population of about 5.2 million people. Mwanza, Arusha, Dodoma, and Mbeya are the other significant cities. With 12 million passengers per year, Julius Nyerere International Airport (DAR) is the country's busiest airport. It is named after Julius Nyerere, the country's first president. Tanzania's airport serves a number of destinations in Africa, Europe, and the Middle East.

Tanzanian culture is influenced by more than 130 tribes and languages. Christianity is the predominant religion. English and Kiswahili are the official languages. The legal system is founded on English common law, and legislative acts are subject to judicial review. A presidential republic is the government type. Every five years, presidential elections are held, with the president being elected directly by the people.

The Tanzanian Schilling (TZS) is the country's official currency. The country has an open economy, with a gross domestic product of $186 billion. Its residents have a $3,574 per capita income. Agriculture and tourism are the primary contributors to Tanzania's GDP, and they are the backbone of the country's economy. Sugar, beer, cigarettes, coffee, sisal, and tea are all important exports.

Tanzania has a wide range of tourist locations and attractions, both urban and nature. It is recognized for its diverse wildlife and numerous national parks that are easily accessible. There are seven UNESCO world heritage sites in the country. Mount Kilimanjaro, the Serengeti National Park, Zanzibar, Lake Manyara, Pemba Island, and Stone Town are just a few of the important locations. Every year, more than 1.3 million tourists come to the country. The vast majority of them are from European and African countries. 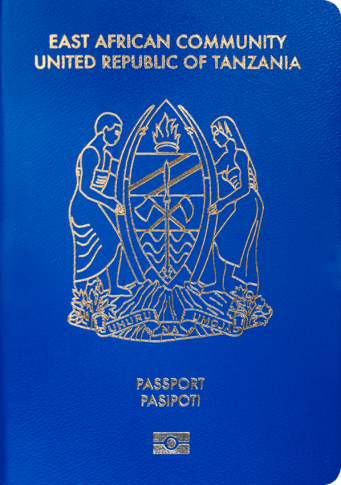 According to the SovSpot Passport Ranking Index, the Tanzanian passport is currently ranked 73rd. It allows visa-free travel to 72 countries. This results in an overall mobility score of medium-low. Tanzanian passport holders can travel to countries including Malaysia, Senegal, Singapore, and Ecuador without a visa or with a visa on arrival. Tanzanian citizens require a visa to visit 157 countries across the world. The United States, the European Union, the United Kingdom, and Japan are among the countries that require a visa ahead of time.