The Heart of Asia

Taiwan's island republic is organized into 11 counties and three cities. Changhua, Pingtung, and Yunlin are the most important counties. It is located in Eastern Asia, on the boundary of East China and the Philippine Sea. The country covers 36,197 square kilometers of land. Its landscape is characterised by rough mountains in the east and flat plains in the west. It has a tropical marine climate with a rainy season from June to August and clouds throughout the year. There are over 23.5 million inhabitants in the country. Taipei, the country's capital and most populated city, has a population of over 2.6 million people. Taichung, Kaohsiung, and Taoyuan are the other important cities. Taoyan International Airport (TPE) is the country's busiest airport, with approximately 48 million people annually. This places it as the world's 36th busiest airport. Several airlines fly to locations all over the world from the airport.

Taiwanese culture has always been a mix of Chinese, Japanese, and Western influences. The predominant faiths are Buddhism and Taoism, but there is a variety of religions. Mandarin Chinese is the official language. The legal system in Taiwan is based on civil law. A semi-presidential republic governs the country.

The New Taiwan dollar (TWD) is the official currency. The country has an open economy, with a gross domestic product of $1.2 trillion. This places it as the fourth-largest economy in the East Asian region. The per capita income of its residents is $54,019. The services and industries sectors account for the majority of GDP. Taiwan is a technological and software powerhouse. Electronics, chemicals, textiles, machinery, grains, and vegetables are the main export items.

Taiwan is a very popular tourist destination in the region. There are numerous urban and natural tourism sites throughout the country. It is recognized for its lively cities as well as its natural beauty. In the county, there are two UNESCO world heritage sites. Taipei, Changhua, Keelung, Yushan National Park, Kinmen, Kaohsiung, Nantou, and Taroko National Park are just a few of the important locations. Every year, around 12 million tourists visit Taiwan, the vast majority of whom are from Asia. 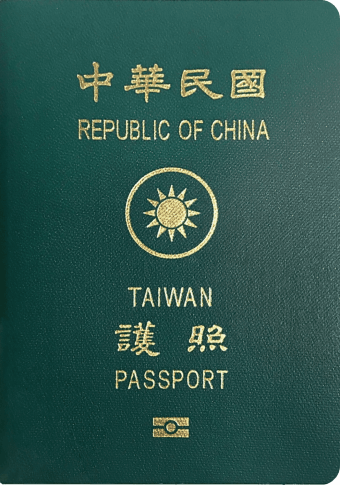 According to the SovSpot Passport Ranking Index, the Taiwanese passport is currently ranked 32nd. It allows entrance to 146 countries without requiring a visa. This gives it a higher total mobility score, making it a desirable passport. Visa-free travel and visa-on-arrival are available to Taiwanese passport holders in countries such as Singapore, the United Kingdom, Israel, and the European Union as a whole. This enables for practically quick travel to some of the world's most popular destinations. Taiwanese passport holders, on the other hand, need a visa to visit 83 countries. India, Ukraine, and Lebanon are among the countries that require a visa.