There are 18 regions that make up the Federal Republic of Somalia. It shares borders with Djibouti, Ethiopia, and Kenya in Eastern Africa. Banaadir, Woqooyi, and Shabeellaha Hoose are the most important regions. The overall size of the country is 637,657 square kilometers. Highlands, plateaus, and plains make up the majority of the terrain. It has a desert climate with more moderate temperatures in the north. It has a population of more than 15.8 million people. Mogadishu, the country's capital and most populated city, has a population of more than 3 million people. Aden Adde International Airport is the largest airport in the country (MGQ). The airport is named after Aden Abdullah Osman Daar, Somalia's first president. Many domestic and international flights are available, particularly to the Middle East.

Somalia's culture is influenced by Islam. Somali and Arabic are the official languages. Families are the backbone of society, frequently led by a patriarch. Civil, customary, and Islamic sharia law combine to form the legal system. A federal parliamentary republic governs the country. President-elect Mohamed Abdullahi Mohamed is the current head of state. The Prime Minister is in charge of the government and regional governments exist in every region, reporting to Mogadishu's central government.

The Somali shilling is the national currency (SOS). The country has an open economy, with a gross domestic product of $13.3 billion. The average household income is $888. The services and agriculture sectors generate the majority of the country's GDP. The last one accounts for 40% of the country's GDP. Bananas, fish, livestock, charcoal, and scrap metal are the most common exports. In order to improve the country's overall economic status, it primarily relies on international aid.

Somalia is still in the early stages of tourism development. Despite the fact that it boasts a variety of natural and culturally unique things for visitors to enjoy. Six UNESCO world historic sites are located throughout the country. Hargeisa, Laas Geel, Zeila, Sa'ad ad Din Island, Berbera, and the Lag Badana-Bushbush National Park are the most popular tourist sites. Mogadishu, the country's capital, also has a number of museums and exhibitions that highlight the country's history and natural beauty. 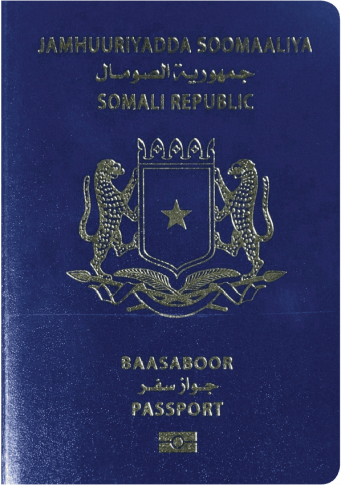 According to the SovSpot Passport Ranking Index, the Somali passport is now ranked 108th. It is regarded as the world's sixth-lowest-ranking passport. Only 33 countries, including Benin, Dominica, Madagascar, and the Seychelles, allow Somali passport holders to travel visa-free. A Somali passport holder is required to obtain a visa for 196 places before traveling. That is why the Passport Ranking ranks so low on the overall global mobility scale. Somalis must apply for a visa in advance for key locations such as the United States and the European Union. Applicants must show documentation such as evidence of funds and a return airline ticket when applying for a visa.