Life in the Rhythm of the Heartbeat

Serbia is divided into 29 districts because it is a landlocked country. Raska, Macva, and Sumadija are the most important districts. The country is located in Southeastern Europe and is one of the Balkan states. Hungary, Romania, Bulgaria, North Macedonia, Kosovo, Montenegro, Bosnia & Herzegovina, and Croatia all share its borders. The country covers a total size of 77,474 square kilometers. The landscape of the country is diverse, ranging from mountains to lowlands and fertile plains. It has a continental climate in the north and a Mediterranean climate in the rest of the country. It has a population of more than 6.9 million people. Belgrade, the country's capital and largest city, is also the country's most populous city. Novi Sad, Nis, and Kragujevac are also important cities. Belgrade Nikola Tesla Airport (BEG) is the country's busiest airport, serving 6.1 million people annually. This places it as the Balkans' fifth busiest airport.

Serbian culture is a blend of Ottoman and Habsburg historic influences, and the airport allows connectivity to regional European attractions. The Christian faith is practiced by the majority of the population. Serbian is the official language. The civil law system governs Serbia. A presidential republic is the government form. The president is elected by an absolute majority through public vote every five years.

The national currency is the Serbian dinar (RSD). The country has an open economy, with a GDP of around $137 billion, putting it in sixth place among all European countries. Its people earn an average of $19,767 per year. The services and industrial sectors account for the majority of GDP. With exports of products including as vehicles, metals, furniture, wheat, maize, and sunflowers, these industries continue to be a significant contributor to the economy.

Serbia is a famous tourist destination recognized for its lush nature and attractive calm villages. Hiking and sightseeing are the most popular visitor activities. Five UNESCO world heritage sites are located throughout the country. Nis, the Devil's Town, Kopaonik National Park, Prizren, the Studenica Monastery, and Belgrade, the capital, are just a few of the main attractions. Every year, around 3.6 million tourists visit Serbia. The majority of visitors come from neighboring countries and Europe. 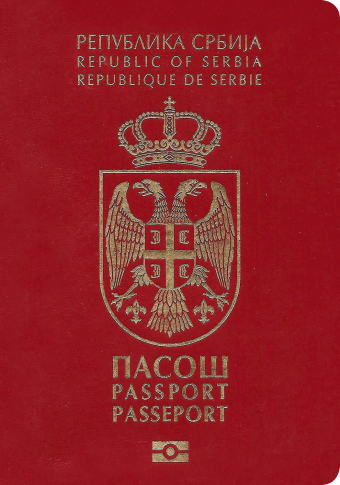 According to the SovSpot Passport Ranking Index, the Serbian passport is presently ranked 35th. It allows people to travel to 140 countries without needing a visa. As a result, it has a good overall mobility score and is a desirable passport. Visa-free travel and visa-on-arrival are available to Serbian passport holders in countries such as Singapore, China, Russia, Israel, and the entire European Union. This enables for practically quick travel to some of the world's most popular destinations. Serbian passport holders, on the other hand, need a visa to visit 89 countries. India, the United States, and Australia are among the countries that require a visa.