San Marino for All

San Marino is a landlocked country with nine municipalities. It lies in Southern Europe and is entirely bordered by Italy. San Marino, Fiorentino, and Domagnano are the most important municipalities. San Marino is the third smallest country in Europe, with a surface area of 61.2 square kilometers. It has a Mediterranean climate with hot summers and moderate winters. Rugged mountains characterize the landscape. The total population is estimated to be around 34,232 people. San Marino is the country's capital. Dogana, with 7,000 residents, is the most populated city. Residents of San Marino must fly to Rimini Airport (RMI) in Italy or take a helicopter flight from Borgo Maggiore because the country lacks an airport. There are road and train connections to neighboring Italy, and many Sammarinese commute between the two countries on a regular basis.

The majority of Sammarinese culture is Italian, with Roman Catholicism being the prevalent religion. Italian is the official language. The legal system is based on civil law with Italian influences. A parliamentary democracy is the type of government with elections every five years.

The Euro (EUR) is the country's official currency. The country has an open economy, with a gross domestic product of of $2 billion. San Marino has one of Europe's smallest economies. Its people earn an average of $60,651 per year. The GDP is primarily composed of two primary sectors: services and industries. Tourism, banking, and export products such as textiles and ceramics are the key contributors to the country's GDP.

San Marino is well renowned for its stunning mountains and quiet villages. The capital of San Marino, the Guiata Fortress, Monte Titano, the Basilica di San Marino, the National Museum, and the Palazzo Pubblico are just a few of the significant attractions. Many tourists visit San Marino because of its banking expertise, which includes leading institutions such as Banca di San Marino and Banca Commerciale Sammarinese. Every year, approximately 2 million tourists visit the country, with the majority of them coming from Italy. 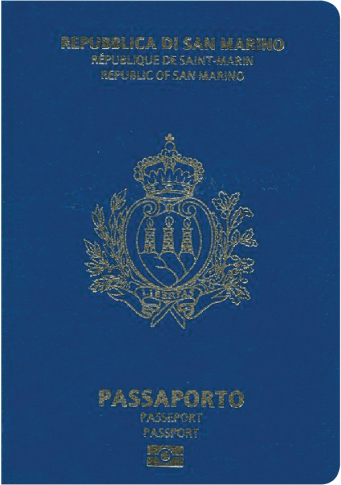 San Marino offers a number of options for residency, each of which has its own benefits. For example, the San Marino Residency by Investment Programme offers a fast and simple way to obtain residency in San Marino. Take into account that dual citizenship is not allowed and that the road to citizenship is very long: 25 years.

According to the SovSpot Passport Ranking Index, the Sammarinese passport is presently ranked 20th. It allows visa-free travel to 172 countries. As a result, it is one of the world's most sought passports, having a very high mobility score. Visa-free and visa-on-arrival entry is available to Sammarinese passport holders in countries such as Brazil, Japan, the United Kingdom, the United States, and the entire European Union, allowing for nearly quick travel around the world. Passport holders from Samoa are need to obtain a visa in order to travel to 57 countries around the world, including India, Russia, and Ghana.