The Independent State of Samoa is a Polynesian island republic with 11 administrative divisions. The most important ones are Tuamasaga, A’na and Aidga-i-le-Tai. The country is situated in Oceania between New Zealand and Hawaii, having a surface size of 2,842 square kilometers. The nation comprises of two main islands and several smaller islands. Samoa’s geography comprises of volcanic mountains and narrow coastal lowlands. Its climate is tropical with a dry season from May to October and a rainy season from November to April.; The whole population is roughly 202,506 people. The capital of the country is Apia, which is also the most populous city with roughly 40,000 inhabitants. Other notable cities are Asau and Mulifanua. The country’s largest and only international airport is Faleolo International Airport (APW) (APW). The airport gives access to locations in Australia, United States and within the area.

Samoa is governed by ancient 3000-year-old Fa’a Samoan traditions with only little impact from its European colonizers. The highest percentage religion is Protestantism. Samoan and English are the official languages. The legal system in Samoa is a hybrid of English common law and customary law. A parliamentary republic governs the country, with elections every five years.

The Samoan tala (WST) is the official currency. The country has an open economy, with a GDP of about $1.1 billion, making it Oceania's sixth largest economy. Its residents have a $5,962 per capita income. The services and industries sectors account for the majority of GDP. Agriculture continues to be enormously significant, accounting for more than 90% of exports with products like fish, coconut oil, and taro. Tourism is a growing industry that accounts for 25% of the country's GDP.

Samoa has a diverse range of natural tourism attractions. It is well-known for its expansive beaches, natural beauty, and Samoan culture. The capital Apia, the Dwarves Cave, the Papaseea Sliding Rocks, Lake Lanoto National Park, the Alofaaga Blowholes, and the Saleaula Lava Fields are just a few of the significant attractions. Fishing, scuba diving, watersports, surfing, and hiking are the most popular tourist activities. Every year, roughly 164,000 tourists visit the island nation, the bulk of them are from New Zealand, Australia, and an increasing number from Europe. 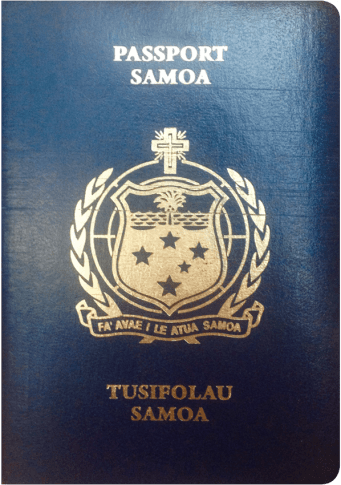 Samoa is a politically stable country with a strong economy, and its citizens enjoy visa-free travel to over 100 countries. Samoa also offers investors a generous tax regime, with no capital gains tax, wealth tax, or inheritance tax. In addition, Samoa has a low cost of living and a tropical climate.

According to the SovSpot Passport Ranking Index, the Samoan passport is now ranked 40th. It allows people to travel to 133 countries without needing a visa. As a result, it has a good total mobility score. Visa-free travel and visa-on-arrival are available to Samoan passport holders in countries such as Singapore, Russia, South Korea, Malaysia, and the European Union. This enables for almost instantaneous travel opportunities all around the world. A visa is required for Samoan citizens to access 96 countries. Taiwan, the United States, and Australia are among the countries that require a visa.