Where dreams come to life

Qatar is divided into eight municipalities. Ad Dawhah, Al Rayyan, and Al Wakrah are the most important municipalities. The country borders Saudi Arabia and the Persian Gulf and is located in the Middle East. With a surface area of 11,581 square kilometers, it is one of the world's tiniest countries. The landscape of the country is primarily flat desert plains. It has an arid climate with hot, humid summers and moderate winters. The population is estimated to be around 2.7 million people. Doha, the country's capital and most populated city, has a population of 2.3 million people. Al Rayyan, Umm Salal Muhammad, and Al Wakrah are also major settlements. With 38.7 million yearly passengers, Hamad International Airport (DOH) is the country's largest international airport. It is named after Hamad bin Khalifa Al Thani, Qatar's previous Emir. The airport offers flights to locations all around the world.

Qatar's culture is heavily influenced by Islam. With roughly 67.7% of the population identifying as Muslims, the religion is practiced by the majority of the population. Arabic is the official language. The country is ethnically varied, with Arabs and foreigners coexisting. Kuwait's legal system is a hybrid of civil and sharia law. The government is set up in the form of an absolute monarchy. Amir Tamim bin Hamad Al Thani is the head of state. Prime Minister Sheikh Khalid ibn Khalifa ibn Abdul Aziz Al Thani is in charge of the government.

The Qatari Riyal (QAR) is the national currency. The country has an open economy, with a gross domestic product of $357 billion. It has the sixth-largest economy among Arab League members. It has a per capita income of $138,910 for its residents. The services and industries sectors account for the majority of GDP. The economy is currently undiversified, despite the government's efforts to attract foreign investment. The petroleum industry accounts for the majority of export revenue.

Qatar is a rapidly developing tourist destination with a restricted number of tourist attractions and sites. With the 2022 FIFA World Cup, a slew of new tourist sites will emerge and become available to the general public. The Katara Mosque, the Al Jassasiya Carvings, the Al Wakra Museum, the Qatar National Museum, and the Doha Corniche are just a few of the significant attractions. Every year, approximately 2 million tourists visit the country, the bulk of whom are from the neighboring Gulf states. 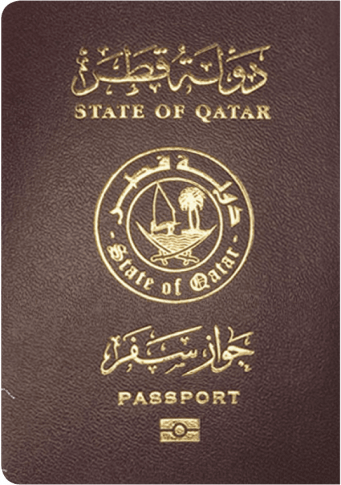 According to the SovSpot Passport Ranking Index, the Qatari passport is now ranked 58th. It allows citizens of 94 countries to travel without a visa. It receives a medium mobility score as a result of this. Visa-free travel and visa-on-arrival are available to Qatari passport holders in countries such as Singapore, the United Kingdom, and Turkey. Qatari passport holders, on the other hand, need a visa to enter around 135 countries around the world, which necessitates fairly extensive trip planning. The European Union as a whole, the United States, and Australia are all visa-required destinations.