Beauty has an address

The Arab country of Oman is called the Sultanate of Oman. It has eleven governorates. It is in the middle of the world and shares borders with Saudi Arabia, Yemen, and the United Arab Emirates. Muscat, Al Batinah, and Ash Sharqiyah are the governorates that are the most important. It is the 10th largest country in the Middle East, with a total area of 309,500 square kilometers. It has a dry desert climate with a monsoon in the far south during the summer. Mountains are in the north and south, and there is a flat desert plain in the middle. There are more than 4.8 million people living there, and about 60% of them are from other countries. Muscat is the country's capital and also its most populous city, with 76,344 people living there. Seeb, Salalah, and Bawshar are also important cities. Muscat International Airport (MCT) is the biggest airport. About 14 million people pass through it every year. The airport is also home to the national airlines Oman Air and Salam Air, and it connects to flights all over the world.

Its culture is mostly shaped by Islam, since 86 percent of its people are Muslims and Arabic is the official language. Sharia law from Islam and Anglo-Saxon law are both used in the legal system. The government is a monarchy, and Sultan Haytham bin Tariq bin Taimur Al-Said is both the head of state and the leader of the government.

The country's official currency is the Omani Rial (OMR). The country has an open economy that brings in about $203 billion in GDP. It has a high income per person, which is $47,366. 85 percent of the government's money still comes from the oil and petrochemical industries. To make the country even less reliant on oil and gas, the government is working to build up other industries, such as finance and tourism.

There are many natural and historical places to visit in the Sultanate of Oman. It has five sites that are on the list of UNESCO World Heritage Sites. Misfat al Abryeen, Masirah Island, Bahla, Salalah, Jebel Akhdar, Ras Al Jinz, and the Musandam Fjords are some of the top places to visit. People go to the country because it is warm and has beaches, hotels, restaurants, and places to shop. Most of the 3.5 million tourists who stay overnight each year come from the nearby Gulf States and Europe. 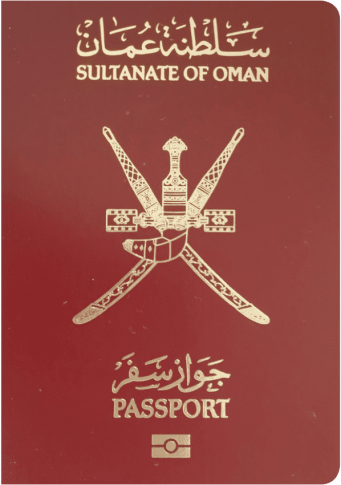 According to the SovSpot Passport Ranking Index, the Omani passport is presently ranked 66th. It allows entrance to 80 countries without requiring a visa. Visa-free travel and visa-on-arrival are available to Omani passport holders in countries such as Malaysia, Singapore, Thailand, and the United Arab Emirates. Omani passport holders, on the other hand, need a visa to visit 149 countries around the world. The United States and the entire European Union are two places where a visa is required. As a result, it receives a mediocre mobility rating.