There are nine provinces that make up the Democratic People's Republic of Korea. It is in East Asia and shares borders with China, Russia, and South Korea. South Pyongan, South Hamgyong, and North Pyongan are the three most important provinces. The land area of the country is 120,540 square kilometers, which makes it the 30th largest in Asia. It has wide plains along the coast, deep valleys, and mountains. The weather is mild, but the winters are very cold. There are more than 25 million people in the country as a whole. Pyongyang is the country's capital. It is also the city with the most people, with more than 2.9 million people living there. Hamhung, Chongjin, and Nampo are also important cities. Pyongyang International Airport is the largest and only international airport in the country right now (FNJ). It is where the national airline, Air Koryo, is based. The airport links Pyongyang to other cities in North Korea and to Beijing. The government and national pride are the most important parts of North Korean culture.

Buddhism, Confucianism, and Christianity all have different beliefs. Korean is the main language. The legal system is based on the civil law of Prussia, with influences from Japan and the Soviet Union. A dictatorship is the type of government. Choe Ryong Hae is the leader of the country right now. He is the president of the Supreme People's Assembly. Kim Jong Un is the leader of the government. He is the head of the State Affairs Commission. Every five years, there are elections, which are set by the Supreme People's Assembly.

The North Korean won is the currency used by the government (KPW). The country has a closed economy that is run by the government. It brings in about $40 billion worth of GDP. The income for each person is $1,800. The industry sector makes up the largest part of the GDP. Mining and making things for the military make up almost all of the GDP. North Korea doesn't have many ways to sell its goods, so it only trades with China. Coal is the main export item.

Tourists can visit many historic and culturally unique places in North Korea. There are two UNESCO world heritage sites in the country as a whole. The demilitarized zone, Mount Myohyang-san, the Tower of Juche, Kim Il Sung Square, the Pyongyang Metro, and the Koryo Museum are the most popular tourist spots. North Korea only gives out tourist visas to people who are going on organized tours led by state-approved workers. There are about 200,000 tourists who come every year. Most of them were made in China. 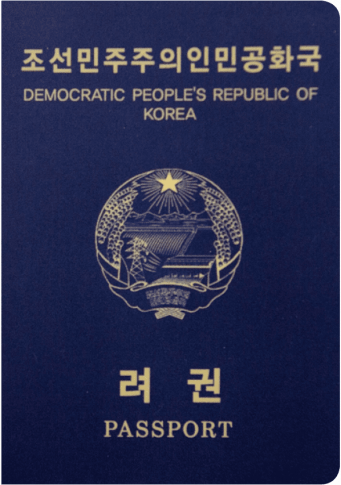 According to the SovSpot Passport Ranking Index, the North Korean passport is now ranked 103rd. It is regarded as one of the world's lowest-ranking passports. Only 40 countries, including Dominica, Madagascar, and the Seychelles, allow North Korean passport holders to travel visa-free. A North Korean passport holder is required to obtain a visa for 189 places before going. That is why the Passport Ranking ranks so low on the overall global mobility scale. North Koreans must apply for a visa in advance for key destinations such as the United States and the European Union. Applicants must show documentation such as evidence of funds and a return airline ticket when applying for a visa.