Once is not Enough

The Federal Democratic Republic of Nepal is a country that can only be reached by land. It has seven provinces. China and India are next to it. Bagmati, Province 1, and Province 2 are the most important ones. The whole area of the country is 147,516 square kilometers. In the south, there is a flat plain along the Ganges River. In the north, there are the rough Himalayas. In the south, it has subtropical summers and mild winters, but in the north, winters are cold and harsh. There are more than 28 million people in the country as a whole. Kathmandu is the country's capital and largest city, with more than 1.4 million people living there. Pokhara and Lalitpur are also important cities. Tribhuvan International Airport (KTM) is the largest and only international airport. About 7 million people pass through it each year. Tribhuvan Bir Bikram Shah was a king of Nepal in the past. The airport is named after him. International flights to East Asia and the Middle East serve most of the area from the airport.

Hinduism is the most important part of Nepal's culture. Buddhism is the second religion most people follow. Nepali is the main language. The legal system is a mix of some ideas from English common law and some ideas from Hindu law. The country has a federal parliamentary republic as its form of government. Each division has its own regional government, which reports to the central government in Kathmandu.

The Nepalese Rupee is the official money (NPR). The country's economy is open, and it has a gross domestic product (GDP) of about $94 billion. This makes it the 5th largest economy in South Asia. The income per person is $3,318. The services and agriculture sectors make up the largest part of the GDP. Remittances from Nepalis living abroad are a big part of the GDP. They make up more than 30 percent of the GDP. Aside from that, Nepal still focuses a lot on agriculture. It exports rice, corn, and wheat, among other things.

There are many unique natural and cultural places for tourists to see in the country. Nepal is proud of its four UNESCO world heritage sites, two of which are cultural and two of which are natural. Some of the most popular places for tourists to visit are Kathmandu, the capital, Bhaktapur, the Boudhanath Stupa, Pokhara, Chitwan National Park, and Mount Everest. About 1.1 million tourists come to the country every year, and most of them come from India and China. 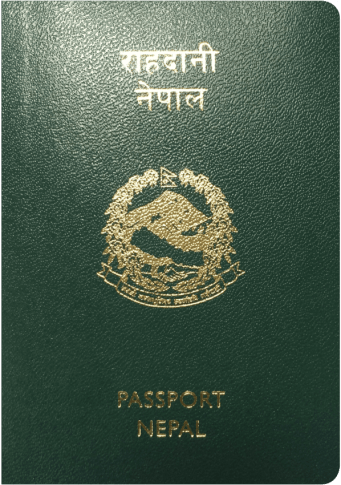 According to the SovSpot Passport Ranking Index, the Nepalese passport is now ranked 105th. It is regarded as one of the world's lowest-ranking passports. Only 37 countries offer visa-free entry to Nepalese passport holders, including Indonesia, Dominica, Madagascar, and the Seychelles. A Nepalese passport holder is required to obtain a visa for 192 destinations before traveling. The passport raking is low on the overall global mobility score because of this. Nepalese citizens must apply for a visa in advance for key destinations such as the United States and the European Union. Applicants must show documentation such as evidence of funds and a return airline ticket when applying for a visa.