Myanmar's Republic of the Union is a former British colony. It is divided into seven regions and is located in Southeast Asia. Thailand, Laos, China, India, and Bangladesh are its neighbors. Yangon, Mandalay, Pathein, and Bago are the most important cities. Myanmar has a surface size of 676,578 square kilometers, making it Asia's 11th largest country. It has a tropical and subtropical climate, with hot, humid summers and a rainy season that lasts from May to October. The geography consists of core lowlands surrounded by steep, craggy peaks. There are over 54 million inhabitants in the country. Naypyidaw is the country's capital. Myanmar's most populated city, however, is Yangon, which has a population of over 5 million people. Mandalay, Taunggyi, and Mawlamyine are also notable cities. Yangon International Airport (RGN) is the country's busiest international airport, with a yearly passenger flow of 6 million. Myanmar is connected to destinations all around Asia via this route.

In 1948, Myanmar declared independence from the United Kingdom. Buddhism inspired its culture, which was later influenced by British colonial rule. The Buddhist faith is the most popular. Burmese is the country's official language. The legal system is a hybrid of common law and customary law from the United Kingdom. President Win Myint serves as both president of state and head of government in this parliamentary republic. The president is chosen indirectly by the Union Assembly. Every five years, elections are held.

The Burmese Kyat (MMK) is the country's official currency. Myanmar has an open economy, with a GDP of around $355 billion dollars. As a result, it is Southeast Asia's seventh largest economy. It has a $6,707 per capita income. The economy is mostly composed of three sectors: industry, agriculture, and services. The administration is enacting reforms in order to attract foreign investment and accelerate economic growth. Currently, the country's economy is mainly reliant on agricultural output. Rice, pulses, beans, sesame, and sugarcane are among the exports.

Myanmar's Republic of the Union is a growing tourism destination with a focus on natural and historic assets. There are two UNESCO world heritage sites in the country. The Shwemawdaw Paya, Ngapali, Mrauk U, Taung Kalat, the Golden Rock, and Bagan are some of the most popular sites. The country features a well-developed collection of international hotels that serve as a base of operations for exploring. 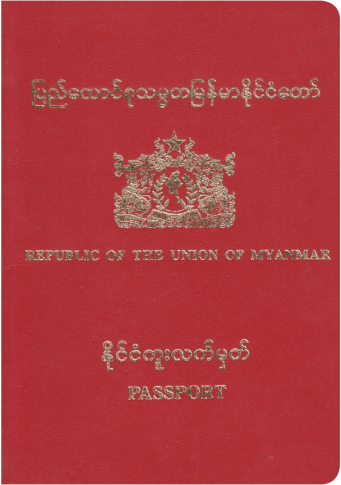 According to the SovSpot Passport Ranking Index, Myanmar's passport presently ranks 98th. It allows visa-free travel to 45 countries. Myanmar passport holders can travel to Kenya, the Philippines, Singapore, Sri Lanka, and Iran without a visa or with a visa on arrival. Myanmar passport holders are need to obtain a visa in order to travel to 184 countries across the world, including China, the United States, and the European Union. Due to the high visa requirement, the mobility score is low, and travel preparations are lengthy.