Come to where it all started

The Republic of Mozambique was once ruled by the Portuguese. It is in the southeast of Africa and has 11 provinces. It shares borders with South Africa, Malawi, Zambia, and Zimbabwe. Nampula, Zambezia, and Tete are the provinces that are the most important. With an area of 801,590 square kilometers, Mozambique is the 16th largest country in Africa. It mostly has tropical or subtropical weather. The landscape is made up of lowlands along the coast, high plateaus, and mountains. There are more than 30 million people in the country as a whole. Maputo is the country's capital. It is also the city with the most people, with 1.1 million people living there. Nampula, Beira, and Chimoio are also important cities in the country. Maputo International Airport is the largest airport in the country (MPM). About 700,000 people use it as a passenger route each year. It links the country with cities in Africa and Portugal.

In 1976, Mozambique got its freedom from Portugal. Its culture is based on a mix of old customs and Portuguese history. Christians and Muslims both live in the country, so there is a mix of faiths. Portuguese is the main language of the country. There are still many people who speak tribal dialects and languages. The system of law is a mix of Portuguese civil law and local customs. A presidential republic is the type of government. Every five years elections are held, and the president is chosen directly by the people.

The country's official currency is the Mozambican Metical (MZN). Mozambique's economy is open, and it has a GDP of about $41.4 billion. This makes it Africa's 23rd biggest economy. It has a $1,331 income per person. Services, industry, and agriculture are the main sectors that add to the GDP. Aluminum, chemicals, cotton, cashews, sugarcane, and tea are all important goods that are sent abroad. One of the largest natural gas drilling sites is being built by the government right now.

The Republic of Mozambique is a growing tourist spot with a number of things to do. It is known for its large number of animals, its beaches, and its safari tours in national parks. It has one site that is on the list of UNESCO World Heritage Sites. The Bazaruto Archipelago, the capital Maputo, Pemba, the Gorongosa National Park, Tofo, and the Island of Mozambique are some of the most popular places to visit. Most of the country's 2,7 million tourists each year come from neighboring African countries and Europe. 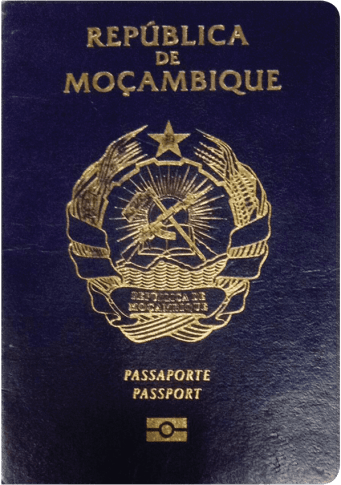 According to the SovSpot Passport Ranking Index, the Mozambican passport is now ranked 83rd. It allows visa-free travel to 61 countries. Visa-free travel and visa-on-arrival are available to Mozambican passport holders in countries such as Indonesia, the Philippines, Singapore, and Iran; nonetheless, visas are required in 168 countries throughout the world. Thailand, Turkey, Russia, and the whole European Union are among the nations that require a visa. Because of the high visa requirement, the mobility score is poor.