The Islamic Republic of Mauritania used to be a part of France. It is in Western Africa and has 15 different areas. It shares borders with Senegal, Mali, Algeria, and Western Sahara. Hodh Ech Chargui, Noukachott-Sud, and Noukachott-Nord are the most important provinces. With a land area of 1,030,000 square kilometers, the country is one of the larger ones in Africa. It is the 11th largest country in Africa. It has a desert climate, which means it is always hot and dry. It has mostly flat land, with a few hills in the middle. There are more than 4.8 million people living there. Nouakchott is the country's capital. It is also the largest city, with more than 1.1 million people living there. Nouadhibou, Kiffa, and Kaédi are also important cities in the country. Nouakchott-Oumtounsy International Airport is the largest airport in the country (NKC). It connects the country to places in France, Africa, and Turkey.

In 1960, Mauritania got its freedom from France. Islam and nomadism are the most important parts of its culture. The majority of the people in the country are Muslim. Arab is the official language of the country. But many people also speak French, English, and Pulaar, which are also national languages. The legal system is based on both French civil law and Islamic sharia law. The country is a presidential republic, and President Mohamed Cheikh El Ghazouani is the elected head of state. Mohamed Ould Bilal is the Prime Minister. He is in charge of running the government. Every 5 years, there are elections.

The country's official currency is the Mauritanian Ouguiya (MRU). The economy of Mauritania is open, and it has a GDP of about $18 billion. This makes it Africa's 39th biggest economy. It has a $4,563 income per person. Services and agriculture are the main sectors that add to the GDP. Gold, oil, and iron ore are the most important and largest parts of GDP. Most of the people still depend on farming and raising animals to make a living.

Mauritania is a developing tourist spot with few things to see and do. It is known for the animals and historic desert sites that live there. The capital, Nouakchott, Chinguetti, Atar, Terjit, Ouadane, Zouérat, and the Diawling National Park are some of the most popular places to visit. Most of the 4,000 tourists who visit every year come from nearby African countries and France, most of them on charter trips. 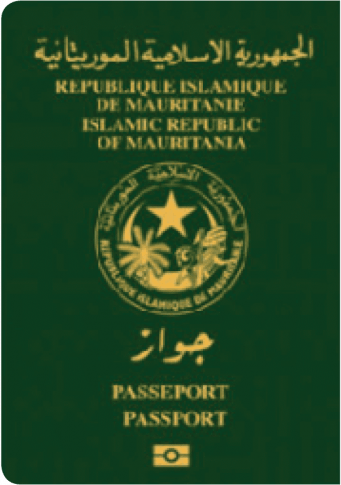 According to the SovSpot Passport Ranking Index, the Mauritanian passport presently ranks 87th. It allows visa-free travel to 57 countries. Visa-free travel and visa-on-arrival are available to Mauritanian passport holders in countries such as Indonesia, the Philippines, Singapore, Sri Lanka, and Iran. Mauritanian people, on the other hand, need a visa to visit 172 countries around the world, including China, Turkey, Russia, the United States, and the European Union as a whole. Because of the high visa requirement, the mobility score is poor.