Formerly a French colony, the Republic of Mali is made up of 10 regions and one capital district. It is in the central part of Western Africa. Guinea, Mauritania, Senegal, Niger, Burkina Faso, Algeria, and Côte d'Ivoire are all on its borders. Sikasso, Koulikoro, and Ségou are the most important places. The land area of the country is 1 240 192 square kilometers. Most of the land is made up of high, flat plains. In the south, there is savanna, and in the northeast, there are hills. Depending on where you are, the climate ranges from subtropical to dry. With 20,2 million people, it is the eighth most populous country in Africa. Bamako is the country's capital. It is also the city with the most people, with more than 2.5 million people living there. The most popular airport is Modibo Keita International Airport (BKO), where about 1 million people pass through each year. The airport is named after Modibo Keita, who was the first president of Mali. It has connections to places in Africa and France.

Tribal and colonial influences are the most important parts of Mali's culture. Among the whole population, 94% are Muslims. French is the main language. The legal system is mostly based on French civil law, with some influences from customary law. A semipresidential republic is the type of government. President Bah Ndaw is in charge of running the country for the time being. Moctar Ouane is the leader of the government.

The country's official currency is the Central African CFA franc (XAF), which is currently worth 552 USD. The economy is open, and the country has a GDP of about $44 billion. The income per person is $2,271. The services sector and agriculture make up the largest part of the GDP. Over 80% of all export earnings come from gold and cotton, which makes the economy very weak and not very diverse. Phosphate, millet, rice, corn, and vegetables are some other important goods that are exported. Mali's economy has grown at a steady rate of more than 5% over the past few years, and the country wants to get investments to help it find iron ore.

There are many unique natural and cultural places for tourists to see in the country. It has four sites that are on the list of UNESCO World Heritage Sites. There are deserts and old cities among these places. Timbuktu, Gao, the capital Bamako, Djenné, Hombori, Boucle du Baoulé National Park, and Taoudenni are some of the most popular places for tourists to go. As the country's capital, Bamako also has a lot of great museums and shows that show off the country's history and natural beauty. 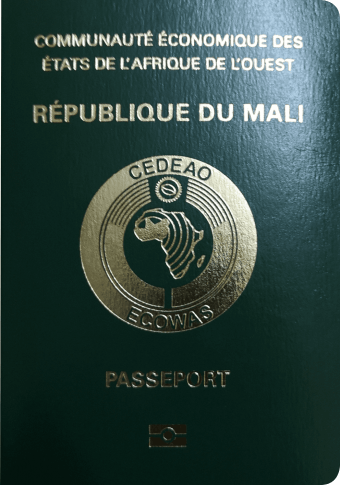 According to the SovSpot Passport Ranking Index, the Malian passport is now ranked 89th. It is regarded as being on the bottom end of the world's Passport Rankings. Only 55 countries, including Indonesia, Ghana, Iran, and Dominica, offer visa-free travel to Malian passport holders. A Malian passport holder is required to obtain a visa for 174 places before going. The passport raking is low on the overall global mobility score because of this. Malians must apply for a visa in advance for major locations such as the United States and the European Union. Applicants must show documentation such as evidence of funds and a return airline ticket when applying for a visa.