A genuine island, a world apart

Madagascar is an island that used to be a French colony. It is in Southern Africa and has 22 different regions. It is east of Mozambique and has the Indian Ocean on all sides. Analamanga, Vakinankaratra, and Atsimo-Andrefana are the three most important places. With an area of 587,041 square kilometers, the country is the 22nd largest in Africa. It has two different kinds of weather: the tropical coast and the temperate interior. It is made up of high plateaus and mountains in the middle and narrow plains along the coast. The total number of people is 26,2 million. Antananarivo is the country's capital and largest city. It has more than 1.2 million people living there. Toamasina, Antsirabe, and Fianarantsoa are also important cities in the country. Ivato International Airport is the biggest airport for international flights (TNR). It connects the country to places in France, Turkey, and Africa. In 1960, France let the Republic of Madagascar become its own country.

Its culture is shaped by many different ethnic groups, each of which has its own beliefs and ways of doing things. There is a mix of Muslim, Christian, and native religions in the country. Malagasy and French are the official languages of the country. The system of law is based on the French civil code, but marriage, family, and obligations are ruled by customary law. The government is a semi-presidential republic. He is in charge of running the government. Every 5 years, there are elections.

The Malagasy Ariary (MGA) is the country's official currency. Madagascar's economy is open, and it has a GDP of about $45.9 billion. This makes it Africa's 20th biggest economy. It has a $1,697 income per person. Services and agriculture are the main sectors that add to the GDP. Up to 25% of the annual GDP comes from agriculture, making it the single most important sector. Madagascar is the biggest exporter of vanilla in the world, making up 80% of the world's supply.

Madagascar is a growing tourist destination with few options right now. It is known for its beautiful beaches and wild animals. Beaches and safaris are the main things that people come to see. The Ranomafana National Park, the Masoala National Park, the Royal Hill of Ambohimanga, and the Avenue of the Baobabs are some of the most popular places to visit. On average, about 500,000 tourists visited the country every year, and most of them came from France. 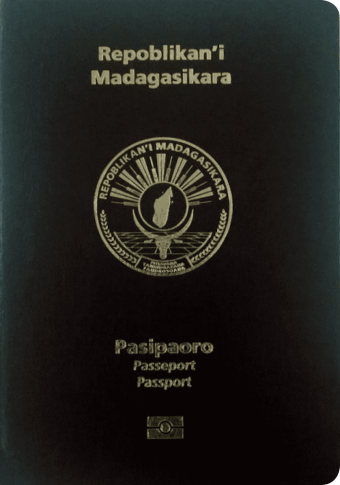 According to the SovSpot Passport Ranking Index, the Malagasy passport is now ranked 86th. It allows visa-free travel to 58 countries. Visa-free travel and visa-on-arrival are available to Malagasy passport holders in countries such as Indonesia, the Philippines, Singapore, Ghana, and Iran. Malagasy nationals, on the other hand, need a visa to visit 171 countries around the world, including China, Japan, Russia, the United States, and the European Union as a whole. Because of the high visa requirement, the mobility score is poor.