The Lebanese Republic is a former French colony in the Middle East made of 8 governorates. It borders Israel and Syria. The most significant governorates are Mount Lebanon, North and South. The country has a total surface area of 10,452 square kilometers, making it the 2nd smallest country in the Middle East. The geography is dominated by a narrow coastal plain and the rugged Lebanon Mountains. Its climate is Mediterranean with heavy snowfall winters in the mountains. The overall population is over 6.8 million people. The capital of the country is Beirut, which is also the most populous city. Other major cities are Tripoli and Jounieh. The largest airport is Beirut-Rafic Hariri International Airport (BEY) with an approximate yearly passenger traffic of 8.6 million people. The airport is named after Rafic Hariri, former Prime Minister of Lebanon. The airport serves most of the region with flights to Europe and the Middle East.

Lebanese culture is influenced by Roman, Arabic, French, Greek and Ottoman history. The religion is a mix between Islam and Christianity. The official language is Arabic. The legal system is a mix of civil, religious and Ottoman law. The government form is a parliamentary republic and elections are being held every 6 years.

The official currency is the Lebanese Pound (LBP). The country has an open economy, generating a GDP of approximately $91 billion, making it the 87th largest economy in the world. The per capita income is $11,562. The largest portion of the GDP is generated by the services sector. The GDP has been growing at a slow rate of 1 to 2% during the past years. Lebanon’s most important export products are wine, jewelry, citrus fruit, grapes, tomatoes and apples. The government has just started oil and gas exploration and is hoping for a major GDP push from this sector.

The country has many natural and culturally unique attractions for tourists to explore. Lebanon boasts with 5 UNESCO world heritage sites which all are cultural. Some of the most popular tourist destinations are Baalbek, the National Museum, Byblos, Beit ed-Dine, the Kadisha Valley and the Jeita Grotto. The capital Beirut also offers a variety of museums and exhibitions showcasing the history and natural beauty of the country. 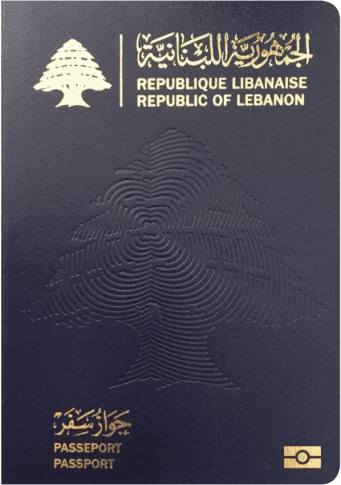 According to the SovSpot Passport Ranking Index, the Lebanese passport is presently ranked 100th. It is regarded as one of the world's lowest-ranking passports. Only 43 countries offer visa-free entry to Lebanese passport holders, including Indonesia, Dominica, Madagascar, and the Seychelles. A Lebanese passport holder is required to obtain a visa for 186 places before traveling. That is why the passport ranks poorly in terms of total global mobility. Lebanese citizens must apply for a visa in advance for key destinations such as the United States and the European Union. Applicants must show documentation such as evidence of funds and a return airline ticket when applying for a visa.