The Lao People’s Democratic Republic is a former French colony and made of 17 provinces. It is located in Southeastern Asia bordering Cambodia, Vietnam, China, Burma and Thailand. The most significant provinces are Savannakhet, Vientiane Prefecture and Champasak. The country has a total surface area of 237,955 square kilometers. The land is dominated by rocky mountains, plateaus and plains. The nation has a tropical monsoon type climate with a dry season from December to April and a rainy season from May to November. Laos overall population is over 7.1 million people making it the 35th most populous country in Asia. The capital of the nation is Vientiane. It is also the most populous city with around 948,477 inhabitants. Other important towns are Savannakhet and Pakxe. The largest airport is Watty International Airport (VTE). It provides Laos with access to many destinations around Asia but lacks intercontinental flights.

The Lao culture is dominated by Theravada Buddhism. Out of the total population 65% are Buddhist. The official language is Lao. The legal system is the civil law similar to the French system. The government form is a communist state. The current chief of state is President Bounnyang Vorachit and the head of government is Prime Minister Thongloun Sisoulit.

The official currency is the Lao Kip (LAK). The country has a state-controlled economy, generating a GDP of approximately $58 billion. The per capita income is $8,458. The GDP consists of the 3 key sectors: services, industry and agriculture. Agriculture remains a backbone of the economy with contributing over 20% to the GDP. Main export goods include gold, copper, timber, rubber, rice, vegetables, corn and coffee. The GDP growth has been strong at between 7 to 8% yearly and the government was also able to attract foreign investment.

Laos is an exciting tourist destination in Southeast Asia. The country has many natural and culturally unique attractions for tourists to explore. It has three UNESCO world heritage sites scattered across the country. Some of the most visited tourist destinations are Kuang Si Caves, the Elephant Village Sanctuary, the 4,000 islands, the Kong Lor Caves, Wat Phu and the Pha Pheng Waterfall. As the capital, Vientiane also offers great museums and exhibitions showcasing the history and natural beauty of the nation. 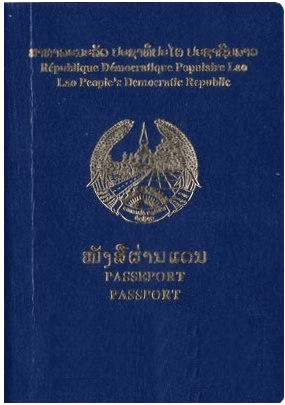 According to the SovSpot Passport Ranking Index, the Lao passport is now ranked 94th. It is regarded as being on the bottom end of the world's Passport Rankings. Visa-free travel and visa-on-arrival are available to Lao passport holders in only 49 countries, including Indonesia, Malaysia, Iran, and Kenya. A Lao passport holder is required to obtain a visa for 180 places before traveling. Because of the high visa requirement, the mobility score is poor. Lao citizens must apply for a visa in advance for key destinations such as the United States and the European Union. Documents such as proof of funds and a return airline ticket are required for visa applicants.