The Island Republic of Kiribati is a former British colony consisting of 6 districts. The most important district is Tarawa. The country is an island nation with over 33 islands. It is in Oceania in the Pacific Ocean. Kiribati geography and terrain are dominated by low lying coral atolls and extensive reefs. Its climate is tropical marine moderated by trade winds. Due to its strategic position, Kiribati played an important role during World War 2. The battle of Tarawa was one of the most important battles in the pacific theatre during the war, which ended in the defeat of the Japanese. The overall population is approximately 123,346 people. The capital of the country is South Tarawa, which is also the most populous city with 56,338 inhabitants. Other important cities are Betio and Bikenibeu. The country’s largest international airport is Bonriki International Airport (TRW). The airport provides access to all domestic destinations and has one international route to Fiji.

The highest percentage religion in the country is Roman Catholicism followed by the native Kiribati Uniting Church. The official languages are I-Kiribati and English. The Kiribati legal system is based on the English common law and supplemented by customary law. The government form is a presidential republic. Presidential elections are held every 4 years.

The official currency is the Kiribati Dollar (KID), which is permanently pegged to the Australian Dollar AUD at a rate of 1:1. The Australian Dollar is used interchangeably with the Kiribati Dollar. The country has an open economy, generating a GDP of approximately $250 million, making it the 4th lowest GDP in Oceania. Its citizens have a per capita income of $2,135. The GDP is mostly made up of the services and agriculture sector. Up until the year of independence 1979 the mining and export of phosphate was the only economic income. Today, the economy only consists of two main goods of export, which are frozen fish and copra.

The Republic Kiribati has a minor tourism industry. Although it has a variety of beautiful untouched natural reserves and reefs. It is known for its vast beaches, world war 2 history, fishing, surfing and diving. It has one UNESCO world heritage site. Some of the major destinations include Tarawa, Christmas Island, the Outer Gilbert Islands, Butaritari and Tabuaeran. The island nation has a total of approximately 7100 tourists visiting every year with the majority originating from New Zealand and Australia. 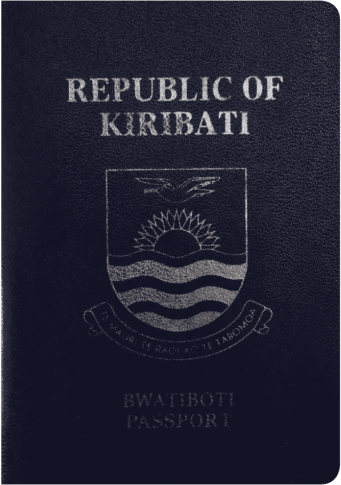 According to the SovSpot Passport Ranking Index, the Kiribati passport is now ranked 48th. It gives 125 countries visa-free entry. As a result, it receives a high mobility rating. Visa-free travel and visa-on-arrival are available to Kiribati passport holders in countries such as Singapore, the United Kingdom, the United Arab Emirates, and the European Union as a whole. Citizens of Kiribati, on the other hand, need a visa to visit roughly 104 countries. Taiwan, the United States, and Russia are among the countries that require a visa.