The Land of Wonders

The Republic of Kazakhstan is a former soviet country consisting of 14 regions. The nation is situated in Central Asia. It is bordered by Turkmenistan, Uzbekistan, Kyrgyzstan, China, Russia and Mongolia. Kazakhstan has a surface area of over 2.7 million square kilometers. This makes it the 7th largest country in the world. Its climate is mostly continental with cold winters and hot summers. Its terrain is characterized by a vast steppe extending throughout the country with some desert in the south. Kazakhstan has an overall population of 18.7 million people. Despite the country’s size it makes it only the 64th most populous country in the world. The capital of the nation is Nur-Sultan. The most populous city however is Almaty with over 1.8 million inhabitants. Other major cities are Shymkent, Aktobe, Karaganda and Taraz. The largest airport is Almaty International Airport (ALA) with 6.4 million yearly passengers. The airport connects Kazakhstan to most parts of the world.

Kazakhstani culture is influenced by Mongolian, Tatar, Arab and Russian influences. The main religions are Islam and Christianity. The official languages are Kazakh and Russian. The legal system is the civil law influenced by Roman-Germanic models. The government type is a presidential republic. Elections are held every 5 years and the president is elected directly by popular vote.

The official currency of the country is the Kazakhstani tenge (KZT). The country has an open economy, generating a GDP of approximately $569 billion. Its citizens have a per capita income of $30,178. The GDP is mostly made up of 2 key sectors, which are industry and services. The main GDP contributing industries are mining and petroleum, forming the backbone of the Kazakhstani economy. Other important export goods are coal, grain, potatoes and vegetables.

Kazakhstan is filled with a variety of urban and natural tourism destinations and attractions. It is known for its vast steppe and different cultural sites available throughout its geography. It has 5 UNESCO world heritage sites. Some of the major destinations include Almaty, the Kolsai lakes, Aksu-Zhabagyly, the Aral Sea, the Tian Shan mountains and the spaceport Baikonur. The nation has a total of over 8.7 million tourists visiting every year. The majority of which are originating from the neighboring countries. 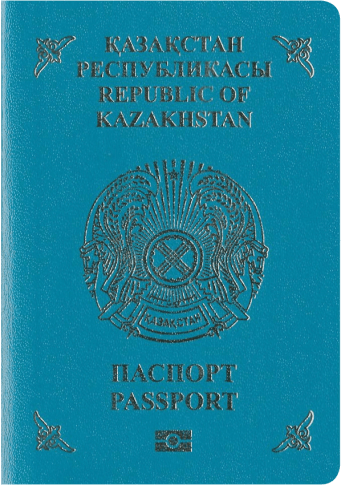 According to the SovSpot Passport Ranking Index, the Kazakhstani passport is presently ranked 68th. It allows people to travel to 78 countries without needing a visa. This results in an overall mobility score of medium-low. Visa-free travel and visa-on-arrival are available to Kazakhstani passport holders in Thailand, the United Arab Emirates, Saudi Arabia, and Ukraine. Kazakhstani nationals need a visa to visit 151 countries across the world. The United States, the European Union, the United Kingdom, and Japan are among the countries that require a visa ahead of time.