The Hashemite Kingdom of Jordan is made of 12 governorates. It is located in the Middle East bordering Saudi Arabia, Iraq, Syria and Israel. The most significant governorates are Amman, Irbid and Zarqa. The country has a total surface area of 89,342 square kilometers. The land is dominated by desert plateaus with valleys and highlands. Its climate is mostly arid with a rainy season in the west of the country from November to April. The overall population is over 10.6 million people making it the 8th most populated country in the Middle East. The capital of the country is Amman, which is also the most populous city. Other major cities are Zarqa and Irbid. The largest airport is Queen Alia International Airport (AMM) with an approximate yearly passenger traffic of 8.9 million people. The airport is named after former Queen Alia Al Hussein. It also hosts the national carrier Royal Air Jordan.

Jordanian culture is dominated by Islam and the former Bedouin lifestyle. Out of the total population 97% is Muslim. The official language is Arabic. The legal system is a mix of the Ottoman, French and the Islamic sharia law. The government form is a parliamentary constitutional monarchy. The current chief of state is King Abdallah II and the head of government is Prime Minister Bisher Al Khasawneh. All provinces have their regional governors, reporting to the Minister of Interior.

The official currency is the Jordanian Dinar (JOD). The country has an open economy, generating a GDP of approximately $93 billion, which makes it one of the smallest in the Middle East. The per capita income is $9,406. The largest portion of the GDP is generated by the services sector and industry. Tourism contributes as a major part of the national GDP. Jordan’s most important export products are citrus fruit, tomatoes, cucumbers, clothing and fertilizers. These products are mostly sold to the neighboring middle eastern countries.

The country has many natural and culturally unique attractions for tourists to explore. It has five UNESCO world heritage sites scattered across the country. These sites range from secluded deserts to the ancient city of Petra. Some of the most visited tourist destinations are Al Maghtas, Jerash, Wadi Rum, the Dead Sea and Aqaba. The capital also offers great museums and exhibitions showcasing the history and natural beauty of the country. 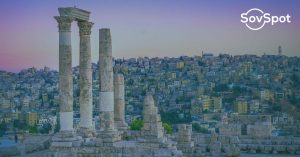 Foreign investors can invest a minimum of $750,000 in Jordan as part of the Citizenship by Investment Program and then apply for citizenship. Access to 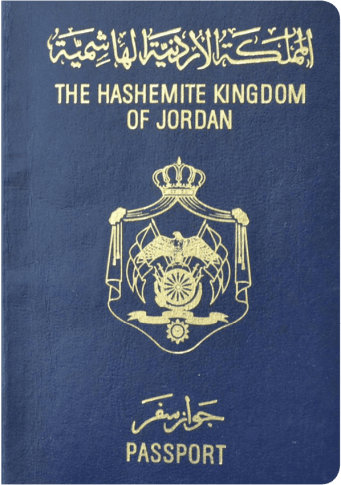 In an effort to compete with other Middle Eastern nations that offer similar RCBI programs, Jordan has decided to open its lucrative commercial sector to foreign investors seeking citizenship in exchange for investment.

According to the SovSpot Passport Ranking Index, the Jordanian passport is presently ranked 93rd. It is regarded as being on the bottom end of the world's Passport Rankings. Only 51 countries offer visa-free travel, visa on arrival, or ETA to Jordanian passport holders, including Indonesia, Malaysia, Georgia, and Dominica. A Jordanian passport holder is required to obtain a visa for 178 places before going. The passport raking is low on the overall global mobility score because of this. Jordanians must apply for a visa in advance for major locations such as the United States and the European Union. Applicants must show documentation such as evidence of funds and a return airline ticket when applying for a visa.