The Republic of India was once ruled by the British. India is in the southern part of Asia. It has 28 states and 8 union territories. It shares borders with China, Pakistan, Bhutan, Bangladesh, and Burma. Utta Pradesh, Maharashtra, and Bihar are the most important ones. With an area of 3,287,263 square kilometers, the country is the seventh largest in the world. It has several climate zones, with temperate weather in the north and tropical monsoon weather in the south. It has plains in the south, rolling plains along the Ganges, and mountains in the north, which are part of the Himalayas. With 1.3 billion people living there, it is the second most populous country in the world. New Delhi is the capital. Mumbai and Bangalore are two other important cities in the country. Indira Gandhi International Airport is the largest airport in the country (DEL). About 67 million people use it as a passenger route each year. It gives the country access to places all over the world. It is named after the former Prime Minister Indira Ghandi.

In 1947, the Republic of India got its freedom from the United Kingdom. Its culture is shaped by its long history and many religions, which go back 4,500 years. Most of the people there are Hindu. India has more than 20 official languages in addition to English, which is used everywhere. The law is based on the common law of England. The government is a federal parliamentary republic with elections every 5 years.

The country's official currency is the Indian Rupee (INR). India's economy is open, and it has a GDP of about $8.6 trillion. This makes it the world's third largest economy. Its income per person is $6,283. Services, industry, and agriculture are the main sectors that add to the GDP. The economy is very diverse, with high-tech computerized industries in cities and farming in the countryside. Textiles, chemicals, steel, rice, and wheat are some of the main things that are exported.

The Republic of India is a popular place for tourists to visit because it has so many places to visit. It is known for its many sights in cities and in nature. There are 38 places on the list of UNESCO World Heritage Sites. The Taj Mahal, the Holy City of Varanasi, Jaisalmer, the Red Fort, Mumbai, and Goa are some of the most popular places to visit. On average, about 10 million tourists came to the country each year. 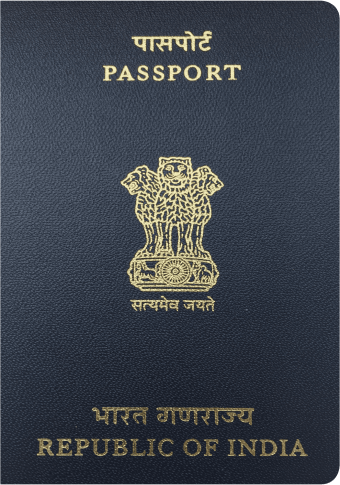 According to the SovSpot Passport Ranking Index, the Indian passport now ranks 85th. It allows visa-free travel to 59 countries. Visa-free entry and visas on arrival are available to Indian passport holders in countries such as Indonesia, Serbia, Thailand, Rwanda, and Iran. Indian nationals, on the other hand, need a visa to visit 170 countries around the world, including China, Japan, Russia, the United States, and the European Union as a whole. Because of the high visa requirement, the mobility score is poor.