The Cooperative Republic of Guyana used to be a British colony. It is made up of ten different regions. Demerara-Mahaica, East Berbice-Corentyne, and Essequibo Islands-West Demerara are the most important areas. It is in the north of South America and shares borders with Venezuela, Brazil, and Suriname. It is made up of 214,970 square kilometers of land. The country is made up of rolling highlands, low coastal plains, and, in the south, the savanna. It has a tropical climate that is hot, humid, and rainy twice a year. There are about 786,391 people in the whole country. Georgetown is the country's capital and largest city, with more than 350,000 people. Linden and New Amsterdam are also important cities. Cheddi Jagan International Airport is the only international airport in the country, and it is also the largest (GEO). It is named after Cheddi Jagan, who used to be the Prime Minister. The airport connects to places in the region and in North America.

The roots of Guyanese culture are African, Indian, and British. Christians and Hindus make up most of the people. English is the main language. The English common law is used as the basis for Guyanese law. A parliamentary republic is the type of government. The President is both the head of state and the head of government. Every 5 years, there are elections.

The Guyanese Dollar (GYD) is the official currency. The country has an open economy and a gross domestic product (GDP) of about $13.6 billion, which makes it the 24th largest economy in the Caribbean and Latin America. The average income of its people is $17,359. The services, manufacturing, and farming sectors are what make up the GDP. Exports of timber, rice, sugar, shrimp, bauxite, gold, and sugar are very important to Guyana. This is equal to 60% of the GDP. Offshore, the country just found oil, which will be taken out of the ground soon. So, it can become a country that makes oil.

Guyana is becoming more and more popular as a place to visit. The country is trying to put more of its attention on ecotourism. The main things that tourists do are go to markets, hike, trek, dive, and watch animals. Kaieteur National Park, the capital Georgetown, Linden, the Orinduik Falls, and Mount Roraima are some of the most popular places to visit. About 315,000 tourists visit Guyana every year. Most of them come from North America and the countries that border Guyana. 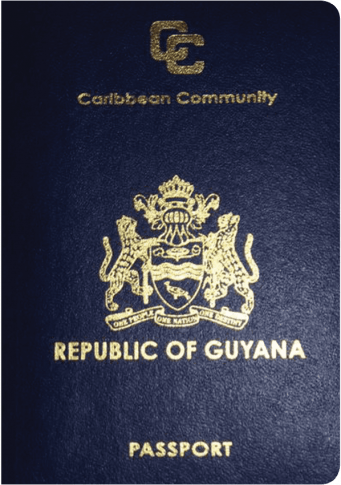 According to the SovSpot Passport Ranking Index, the Guyanese passport is now ranked 61st. It allows citizens of 87 countries to travel without a visa. It receives a medium mobility score as a result of this. Visa-free entry and visas on arrival are available to Guyanese passport holders in countries such as Singapore, Ireland, Russia, Qatar, and South Korea. This restricts instant travel options to specific places. A visa is required for Guyanese passport holders to access 141 countries. The whole European Union, the United States, and Australia are among the countries that require a visa.