The Republic of Guinea was once ruled by France. It is in Western Africa and has 8 different regions. It shares borders with Senegal, Mali, Côte d'Ivoire, Liberia, Sierra Leone, and Guinea-Bissau. Kankan, Conakry, and Nzerekore are the most important parts of the country. With an area of 245,857 square kilometers, the country is the 31st largest in Africa. This makes it one of the smaller countries on the continent. In general, it is hot and humid, and from June to November, it rains a lot because of the monsoon. The land is made up of low plains along the coast and a hilly to mountainous interior. The total number of people is over 12,4 million. Conakry is both the country's capital and most populous city. Nezerekore, Kankan, and Maneah are also important cities in the country. Conakry International Airport is the biggest airport (CKY). It links the country with places in Africa, Europe, and the Middle East.

In 1958, France gave the Republic of Guinea its freedom. Its culture is based on a mix of old customs and French history. There are people of different faiths in the country, but most of them are Muslims. France is a country where French is the official language. The system of law is based on the French system of civil law. The country is a presidential republic, with a President as the elected head of state and a Prime Minister as the head of government. Every five years, there are elections, and the president is chosen by a direct vote of the people.

The country's official currency is the Guinea franc (GNF). Guinea's economy is open, and it has a GDP of about $26.4 billion. This makes it Africa's 32nd biggest economy. It has a $2,390 income per person. Services, agriculture, and industry are the main sectors that add to the GDP. Guinea has the most iron ore and bauxite of any country in the world. Both are mostly untapped, which gives it a lot of chances for the future. Reforms have been hard to implement because of political instability.

Guinea is a growing tourist destination with a number of things to do. It is known for the animals and natural places that live there. There is only one UNESCO World Heritage Site at the moment. The beaches and wildlife safaris are the main things that people come to see. The capital, Conakry, Iles de Los, the National Park of Upper Niger, Nzerekore, the Fouta Djallon Highlands, Mount Nimba, and Dubreka are some of the most popular places to visit. On average, around 99 thousand tourists visited the country each year. 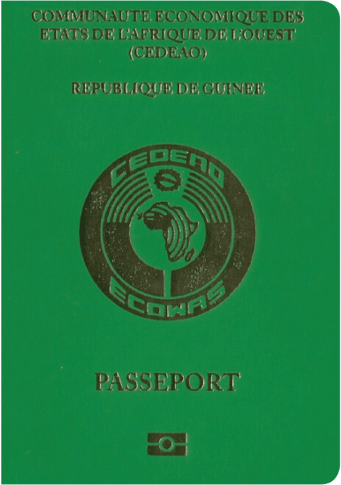 According to the SovSpot passport index, the Guinean passport presently ranks 89th. It allows visa-free travel to 55 countries. Visa-free travel and visa-on-arrival are available to Guinean passport holders in countries such as Malaysia, the Philippines, Singapore, Ghana, and Dominica. Guineans, on the other hand, need a visa to visit 174 countries around the world, including China, Japan, Russia, the United States, and the whole European Union. Because of the high visa requirement, the mobility score is poor.