The Republic of Ghana was once ruled by the British. It is in Western Africa and has 16 different regions. Burkina Faso, Togo, Côte d'Ivoire, and the Gulf of Guinea are all on its borders. Greater Accra, Upper East, and Central are the most important parts of Ghana. Ghana has an area of 239,567 square kilometers, making it the 32nd largest country in Africa. It has a mostly tropical climate. The coast is dry, the north is hot, and the southwest is damp. Most of the land is low plains, and there is a plateau in the south-central part. There are more than 31 million people in the country as a whole. Accra is the country's capital. It is also the city with the most people, with 4.2 million people living there. Kumasi, Tamale, and Sekondi-Takoradi are also important cities in the country. Kotoka International Airport is the most important airport (ACC). It's thought that more than 3 million people pass through it each year. It links the country with places in Africa, Europe, and the United States.

In 1957, Ghana got its freedom from Britain. Its culture is a mix of old traditions and European history. Christianity is the most common faith in the country. English is the main language of the country. The system of law is a mix of English common law and local customs. A presidential republic is the type of government. The President is the leader of the government and head of state. He was chosen by the people. Every four years, there are elections, and the president is chosen directly by a majority of the people.

Ghana's official currency is the Ghanaian cedi (GHS). Ghana's economy is open, and it has a GDP of about $226 billion. This makes it Africa's 11th biggest economy. Its income per person is $7,343. Services, industry, and agriculture are the main sectors that add to the GDP. The agricultural sector is responsible for 20% of the GDP. Cocoa, rice, cassava, peanuts, corn, oil, gold, and lumber are all goods that are important to export.

The Republic of Ghana has many things to see and do for tourists. It is known for its large number of animals and safari tours in national parks. It has two places that are on the list of UNESCO World Heritage Sites. Some of the most popular places to visit are Accra, the capital, Labadi Beach, Jamestown, Cape Coast, Kakum National Park, Elmina Castle, Busua, and Mole National Park. 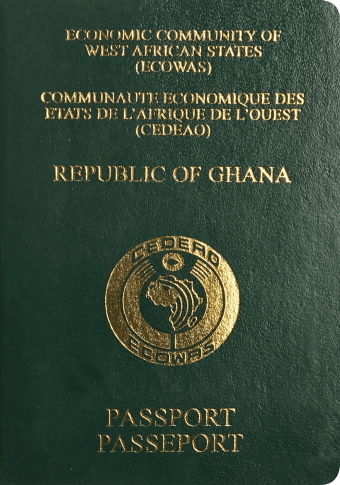 According to the SovSpot passport index, the Gabonese passport is currently ranked 88th. It allows visa-free travel to 56 countries. Visa-free travel and visa-on-arrival are available to Gabonese passport holders in countries such as Indonesia, the Philippines, Singapore, Ghana, and Iran. Gabonese citizens, on the other hand, need a visa to visit 173 countries around the world, including China, Japan, Russia, the United States, and the European Union as a whole. Because of the high visa requirement, the mobility score is poor.