The Smiling Coast of Africa

The Republic of the Gambia is divided into five regions and was once a British colony. Senegal and the North Atlantic Ocean border the country, which is located in Western Africa. West Coast, Banjul, and Upper River are the most important regions. The Gambia is a country with a land area of 10,689 square kilometers. This places it as Africa's sixth smallest country. It has a tropical climate with rainy and dry seasons. The Gambia River's flood plain, mangroves, and savanna characterize the topography. The Gambia's population totals more than 2.1 million people. This places it as Africa's 44th most populous country. Banjul, the country's capital and most populated city, has a population of about 443,000 people. Serrekunda, Brikama, and Bakau are the other important cities. Banjul International Airport is the largest airport in the country (BJL). The airport connects Gambia to a number of African, European, and Turkish destinations.

Ethnic groups from all over the world have influenced Gambian culture. Islam is the predominant religion. English is the official language. The legal system is a blend of English common law, sharia law, and customary law. A presidential republic is the government type. Every five years, presidential elections are held, with the president being elected directly by the people.

The Gambian dalasi (GMD) is the country's official currency. The country has an open economy, with a gross domestic product of $5.4 billion. Its residents have a $2,240 per capita income. Agriculture, industry, and services are the three main industries that make up the GDP. The agricultural sector is extremely significant and has a lot of space for growth. Remittances from Gambians working abroad account for almost 20% of the country's GDP. Peanuts, fish, rice, millet, sorghum, and peanuts are currently key export items.

Gambia is a rapidly growing tourist attraction. It is well-known for its varied biodiversity and easily accessible national parks. There are two UNESCO world heritage sites in the country. The Abuko Nature Reserve, Banjul, Brufut Beach, Sanyang Village and Beach, the National Museum, and the Wassu Stone Circles are just a few of the significant attractions. Every year, more than 550,000 tourists come to the country. 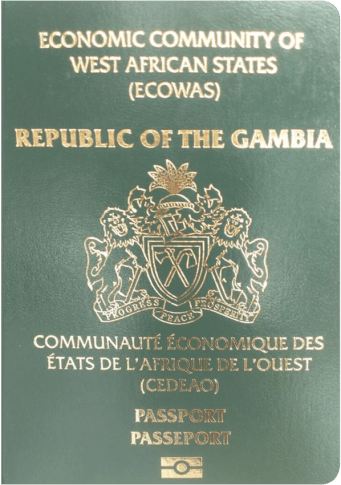 According to the SovSpot Passport Ranking Index, the Gambian passport is now ranked 76th. It allows visa-free travel to 68 countries. This results in an overall mobility score of medium-low. Visa-free entry and visas on arrival are available to Gambian passport holders in countries such as Malaysia, Senegal, Singapore, and Barbados. A visa is required for Gambian people to travel to around 161 countries across the world. The United States, the European Union, the United Kingdom, and Japan are among the countries that require a visa ahead of time.