Ethiopia's Federal Democratic Republic is divided into 12 regions and is located in Western Africa. Somalia, Djibouti, Eritrea, Sudan, South Sudan, and Kenya are its neighbors. Oromia, Amhara, and the Southern Nations are the most important regions. Ethiopia has a land area of 1,104,300 square kilometers, making it Africa's tenth largest country. It has a tropical monsoon climate with some variances due to the varied geography. High plateaus and a vast highland complex of mountains characterize its topography. With a population of approximately 109 million people, it is Africa's second most populous country. Addis Ababa is the country's capital. With 3.2 million residents, it is also the most populated city. Mekelle, Gondar, and Adama are also prominent cities in the country. Addis Ababa Bole International Airport is the largest airport (ADD). It has an annual passenger volume of over 12 million people. Ethiopian Airlines, the country's flag carrier, is based there, connecting the country to destinations all over the world.

Ethiopian culture is influenced by Arab, Italian, Indian, and Malaysian influences. The Orthodox faith is the country's predominant religion. The country speaks a variety of languages, all of which are recognized as official. Civil law is the legal system. A federal parliamentary republic governs the country. President Sahle-Work Zwede is the elected head of state, and Prime Minister Abiy Ahmed is the head of government. Elections are held every six years.

The Ethiopian birr (ETB) is the country's official currency. Ethiopia has a planned economy with a gross domestic product of $272 billion dollars. This places it as Africa's sixth largest economy. It has a $2,772 per capita income. Services, industry, and agriculture are the key contributors to GDP. Textiles, leather, chemicals, cereals, coffee, cotton, sugarcane, vegetables, and khat are the principal export items.

Ethiopia is a fascinating tourist destination with a variety of attractions. It is well-known for its national parks and biodiversity. Nine UNESCO world heritage sites can be found throughout the country. Trekking, sightseeing, and wildlife watching are the most popular visitor activities. Lalibela, Harar, the Babile Elephant Sanctuary, the Rift Valley, the Blue Nile Falls, the Omo Valley, Gondar, the capital Addis Ababa, and the Simien Mountains are all renowned tourist sites. Every year, Ethiopia receives roughly 2.5 million tourists. 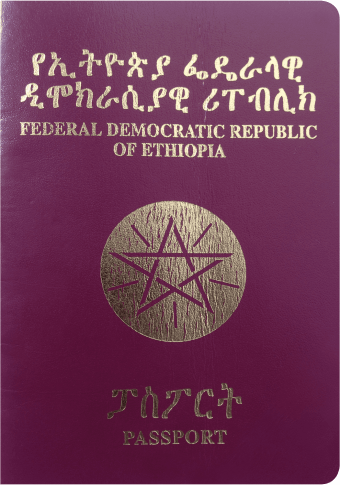 According to the SovSpot passport index, the Ethiopian passport currently ranks 98th. It allows visa-free travel to 45 countries. Visa-free travel and visa-on-arrival are available to Ethiopian passport holders in countries such as Ghana, Mauritius, Kenya, and Iran. Ethiopian people need a visa to travel to 184 countries across the world. China, Russia, the United States, and the whole European Union are among the countries that require a visa. Because of the hefty visa requirement, the mobility score is relatively low.