Eritrea is a country that was once an Italian colony. It has ten provinces and is located in Eastern Africa. Djibouti, Ethiopia, and Sudan are its neighbors. Debub, Gash-Barka, and Maekel are the most important provinces. With a surface size of 117,600 square kilometers, Eritrea is Africa's 37th largest country. It has a variety of climates, including a hot and dry desert along the Red Sea and a semiarid environment in the western hills. It has highlands to the east and plains to the northwest, with plains to the east and hills to the northwest. There are over 6 million inhabitants in the city. Asmara, the country's capital and largest city (with a population of over 1 million people), is the country's most populous city. Keren, Massawa, and Assab are also prominent cities. Asmara International Airport is the country's largest and only international airport (ASM). It connects the country to African, Italian, and Middle Eastern locations.

In 1941, Eritrea declared independence from Italy, but the British took over administration. Its culture is dominated by a mash-up of ethnic customs as well as Italian ancestry. The country's primary religion is Christianity. Tigrinya, Arabic, and English are the official languages of the country. Civil, customary, and Islamic law combine to form the legal system. A presidential republic is the government form. Every five years, elections are held. Eritrea, next to the United States, is the only country in the world that taxes citizens based on their citizenship, independently of their current residence.

The national currency is the Eritrean nakfa (ERN). Eritrea's economy is tightly controlled, with a GDP of around $11 billion. This places it as Africa's 43rd largest economy. It has a $1,797 per capita income. Services and industry are the two main contributors to GDP. Textiles, salt, sorghum, cotton, tobacco, and lentils are the principal export items. Potential economic progress is being slowed by a lack of well-guided economic policies and a skilled workforce.

Eritrea is a growing tourist destination with a range of attractions, particularly colonial ones. It is well-known for its wildlife and historical significance. One natural UNESCO world heritage site exists. Sightseeing and animal watching are the most popular visitor activities. Asmara, Massawa, the Imperial Palace, Senafe, Dahlak Marine National Park, Filfil, and Keren are some of the places to visit. The majority of the 142,000 tourists who visit each year come from nearby African countries and Europe. 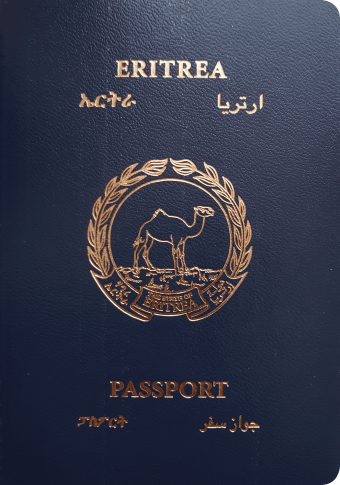 According to the SovSpot Passport Ranking Index, the Eritrean passport presently ranks 103rd. It allows visa-free travel to 40 countries. Visa-free travel and visa on arrival are available to Eritrean passport holders in countries such as the Philippines, Singapore, and Iran. Eritreans need a visa to travel to 189 countries across the world, including China, Russia, the United States, and the whole European Union. Because of the hefty visa requirement, the mobility score is relatively low.