The former Spanish colony of Equatorial Guinea is now the Republic of Equatorial Guinea. It has eight provinces, three of which are on islands and the remainder on the mainland, and is located in Central Africa. It is bordered by Cameroon and Gabon and is encircled by the Gulf of Guinea. Litoral, Bioko Norte, Wele-Nzas, and Kié-Ntem are the most important provinces. With a surface size of 28,050 square kilometers, it is Africa's 44th largest country. It has a tropical climate, which means it is always hot and humid. The land is separated into two sections: islands and mainland. The islands are volcanic, whereas the mainland is flat along the coast and hilly throughout. There are over 1.4 million people in the city. Malabo, the country's capital and most populated city, has a population of about 300,000 people. Bata, Ebebiyin, and Aconibe are also prominent cities in the country. Malabo International Airport is the country's largest international airport (SSG). It connects the country to African, European, and Turkish destinations.

In 1968, the Republic of Equatorial Guinea declared independence from Spain. Its culture is influenced by a mix of ethnic groups as well as Spanish ancestry. Particularly on Bioko Island. The Christian religion is the most widely held belief. French, Portuguese, and Spanish are the official languages of the country. The legal system is a hybrid of civil and customary law. The government is structured as a presidential republic, with a President and Prime Minister. Elections are held every seven years.

The Central African CFA franc (XAF) is the country's official currency. Equatorial Guinea has an open economy with a GDP of $29.1 billion dollars. This places it as Africa's 26th largest economy. It has a $21,442 per capita income. Services and industry are the two main contributors to GDP. The oil and gas industry provides the government with all of its revenue. The government is planning diversification, but it is happening slowly.

Equatorial Guinea is an emerging tourism destination with few possibilities at the moment. It is recognized for its stunning beaches and abundant fauna. The capital, Malabo, the Monte Alen National Park, Moca, and San Antonio de Ureca are also popular tourist sites. On average, almost 100,000 tourists visited the country each year. 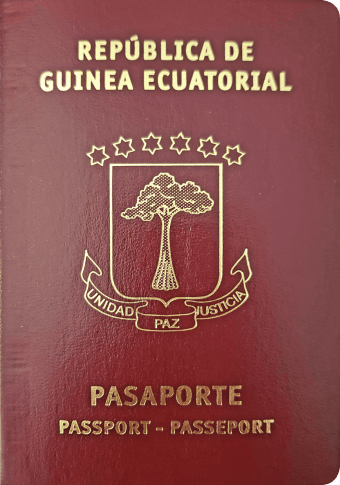 According to the SovSpot Passport Ranking Index, the Equatorial Guinean passport is now ranked 88th. It allows visa-free travel to 56 countries. Visa-free travel and visa-on-arrival are available to Equatorial Guinean passport holders in countries such as Hong Kong, the Philippines, Singapore, Ghana, and Iran. Citizens of Equatorial Guinea, on the other hand, need a visa to visit 173 countries across the world, including China, Japan, Russia, the United States, and the whole European Union. Because of the high visa requirement, the mobility score is poor.