The former French colony of Côte d'Ivoire. It is made up of 14 districts and is located in Western Africa. Burkina Faso, Guinea, Ghana, Liberia, and Mali share their borders. Abidjan, Sassandra-Marahoué, and Bas-Sassandra are the most prominent districts. With a surface area of 322,463 square kilometers, the country is Africa's 28th largest, making it one of the continent's smaller countries. There are two climate zones in the country: the tropical coast and the semiarid far north. It has a generally flat terrain with mountains towards the northwest. There are 26.3 million inhabitants in the country. Yamoussoukro is the country's capital. The most populated city, however, is Abidjan, which has a population of 3.6 million people. Abodo, Bouaké, and Daola are also prominent cities in the country. Félix-Houphout-Boigny International Airport is the largest (ABJ). It has an annual passenger volume of around 2 million persons. It connects the country to African, French, and Middle Eastern locations. It is named after Félix Houphout-Boigny, Côte d'Ivoire's first president.

In 1960, the Republic of Côte d'Ivoire declared independence from France. Its culture is influenced by a blend of customs and French ancestry. The country is religiously diverse, with Muslims dominating, followed by Christians. French is the country's official language. There are also more than 60 native languages and dialects. The legal system is based on the civil code of France. President Alassane Dramane Outtara was chosen as the country's chief of state in a presidential republic. Every five years, elections are held.

The West African CFA franc (XOF) is the country's official currency. The economy of Côte d'Ivoire is open, with a GDP of about $144 billion. This places it as Africa's 13th largest economy. It has a $5,360 per capita income. Services and agriculture are the two largest contributors to GDP. Côte d'Ivoire exports the most cocoa beans in the world and is a major producer of coffee and palm oil. Over the last five years, the country's economy has been among the fastest expanding in the world.

The tourism industry in Côte d'Ivoire is still expanding, so there are just a few possibilities. It is well-known for its wildlife and historical landmarks. Beaches and safaris are the most popular tourist attractions. The Grand-Bassam, Abidjan, and the Tai National Park are among of the most popular locations. On average, roughly 1.9 million tourists visited the country each year. 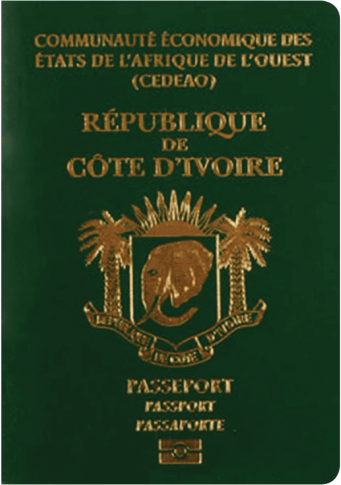 According to the SovSpot Passport Index, the Ivoirian passport presently ranks 89th. It allows visa-free travel to 55 countries. Visa-free travel and visa-on-arrival are available to Ivoirian passport holders in countries such as Indonesia, the Philippines, Singapore, Ghana, and Lebanon. Ivoirian citizens, on the other hand, need a visa to visit 174 countries around the world, including China, Japan, Russia, the United States, and the European Union as a whole. Because of the high visa requirement, the mobility score is poor.