Former Belgian colony, the Democratic Republic of the Congo (DRC). It has 25 provinces and is located in Central Africa. Zambia, Angola, the Democratic Republic of the Congo, the Central African Republic, South Sudan, and Tanzania are its neighbors. Kinshasa, Tshopo, and Zongo are the most important provinces. With a surface size of 2.3 million square kilometers, the DRC is Africa's second largest country. Because of its size, its climate is diverse, but it is mainly tropical, with varying dry and rainy seasons. A huge center basin, high plateaus, and three mountain ranges characterize the topography. There are more than 101 million people in the country. Kinshasa, the country's capital, is also the country's largest city, with a population of 14 million people. Mbuji-Mayi, Lubumbashi, and Kananga are also prominent cities. N'Djili International Airport is the largest (FIH). It is named after the Ndjili River, which is close to the airport, and connects the country to places across Africa, Belgium, and France.

In 1960, the DRC declared independence from Belgium. Its culture is influenced by a blend of ethnic customs as well as Belgian background. The country's primary religion is Christianity (95 percent ). The country's official language is French, making it the world's most populated francophone country. Belgian civil, customary, and tribal law form the basis of the legal system. A semi-presidential republic governs the country. Every five years, elections are held.

The Congolese franc (CDF) is the official currency. The Democratic Republic of the Congo has an open economy with a GDP of $77 billion. This places it as Africa's 17th largest economy. It has a $843 per capita income. Services and agriculture are the two largest contributors to GDP. Coffee, copper, cobalt, gold, and quinine are the principal export items. The government wants more diversification, but it's taking a long time to happen.

The Democratic Republic of the Congo is a developing tourism destination with limited attractions. It is well-known for its national parks and biodiversity. There are five UNESCO world heritage sites that are natural. Primate tracking and animal watching are the most popular visitor activities. The Lola Ya Bonobo, the Kahuzi Biega National Park, and the Nyiaragongo Volcano are some of the places to visit. The majority of the 350,000 annual tourism visitors come from neighboring African and European countries. 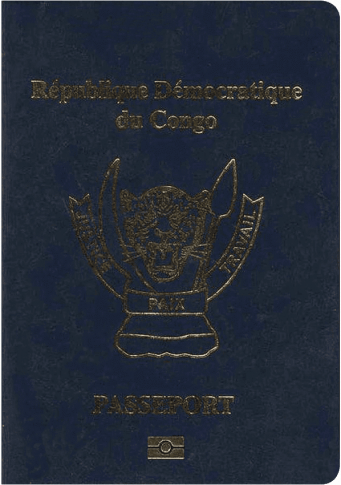 According to the SovSpot Passport Ranking Index, the passport of the Democratic Republic of Congo presently ranks 99th. It allows visa-free travel to 44 countries. Visa-free travel and visas on arrival are available to Congolese passport holders in countries such as the Philippines, Singapore, and Kenya. Congolese people require a visa to travel to 185 countries across the world, including China, Russia, the United States, and the European Union as a whole. Because of the hefty visa requirement, the mobility score is relatively low.