All of Africa in one Country

Cameroon is a former colony of France and the United Kingdom. It is divided into ten zones and is found throughout West and Central Africa. Equatorial Guinea, Gabon, the Congo Republic, the Central African Republic, Chad, and Nigeria are its neighbors. Central, Far North, and Littoral are the most important provinces. With a total size of 475,442 square kilometers, Cameroon is Africa's 25th largest country. It has a variety of climates, ranging from semiarid and hot in the north to tropical towards the coast. Its landscape is varied, with plains, plateaus, and mountains. A total of 26.5 million people live in the country. Yaoundé is the country's capital. Douala, on the other hand, is the most populated city in the country, with a population of about 2.7 million people. Garoua, Kousséri, and Bamenda are also prominent cities in the country. Douala International Airport is the largest airport in the country (DLA). Aproximate passenger traffic is 1.5 million per year. It connects Cameroon to locations across Africa and Europe, in conjunction with Yaoundé Nsimalen International Airport.

Cameroon gained independence from France in 1960. Its culture is dominated by the more than 240 tribes that make up the country. The most widely practiced religion is catholic Christianity, which is followed by Islam. The country's official languages are French and English. Indigenous languages and dialects are still widely spoken. The legal system is a blend of common law, civil law, and customary law. The President is the head of state, while the Prime Minister is the head of government of this presidential republic.

The West African CFA franc (XOF) is the country's official currency. Cameroon is a country with an open economy, with a GDP of $95 billion. This places it as Africa's 16th largest economy. It has a $3,820 per capita income. The economy of the country is diverse. However, oil exports still account for 40% of the country's GDP. Furthermore, the country has a robust agricultural industry, ranking third in the world for plantain output.

The Republic of Cameroon is a relatively new tourist destination with few attractions. Due to the diversity of attractions and activities, the government refers to it as "all of Africa in a single country." The capital, Yaoundé, Limbe, Waza National Park, Foumban, and Camp Ma'an National Park are all popular tourist sites. The majority of the 915,000 annual tourism visitors come from nearby African countries and Europe, and the number is steadily increasing. 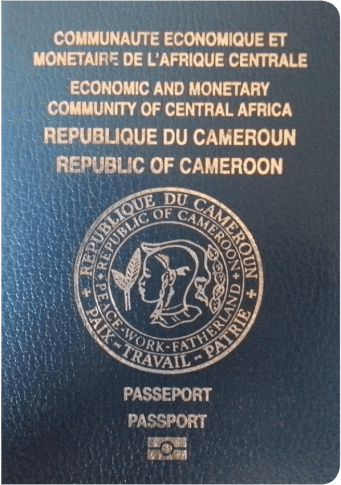 According to the SovSpot Passport Ranking Index, the Cameroonian passport is now ranked 94th. It only allows visa-free travel to 49 countries. Visa-free travel and visa-on-arrival are available to Cameroonian passport holders in countries such as Mauritius, the Philippines, Singapore, Ethiopia, and Iran. Cameroonian people need a visa to travel to 180 countries across the world. This high visa requirement results in a low mobility score and necessitates extensive trip planning prior to departure.