Burundi is a former Belgian colony now known as the Republic of Burundi. It has 18 provinces and is located in Central Africa. Tanzania, Rwanda, and the Democratic Republic of the Congo are its neighbors. Gitega, Ngozi, and Muyinga are the most important provinces. Burundi is a small African country, with a total size of 27,834 square kilometers. It has an equatorial climate and is characterized by hills and mountainous terrain. A total of 11.8 million people live in the city. Gitega is the country's capital. Bujumbura, however, is the largest city, with a population of 331,000 people. Bobo-Muyinga, Ruyigi, and Ngozi are also prominent cities in the country. Melchior Ndadaye International Airport is the largest (BJM). It has an annual passenger volume of about 131,000 persons. It connects the country to African locations as well as Belgium. Melchior Ndadaye, the county's first democratically elected president, is honored here.

In 1962, Burundi declared independence from Belgium. Its culture is influenced by a blend of customs and Belgian ancestry. The country's primary religious affiliation is Roman Catholicism, which is practiced by 62 percent of the population. French, Kirundi, and English are the official languages of the country. Belgian civil and customary law form the foundation of the legal system. A presidential republic is the government form. Every five years, elections are held.

The Burundi franc (BIF) is the country's official currency. Burundi has an open economy with a gross domestic product of $8.3 billion dollars. As a result, it is one of Africa's smallest economies. It has a $727 per capita income. Services and agriculture are the two largest contributors to GDP. Coffee and gold are the two main export items. The government is attempting to diversify its portfolio, but progress is gradual.

Burundi is an emerging tourism destination with a small number of attractions. It is well-known for its national parks and biodiversity. The capital, Bujumbura, the Rusizi River National Park, the Kigwena Natural Forest, and Mount Heha are among the places to visit. The majority of the 299,000 annual tourism visitors come from surrounding African countries, with a few Europeans thrown in for good measure. With funding from the African Development Bank, the government has put in place a 20-year tourism development strategy. 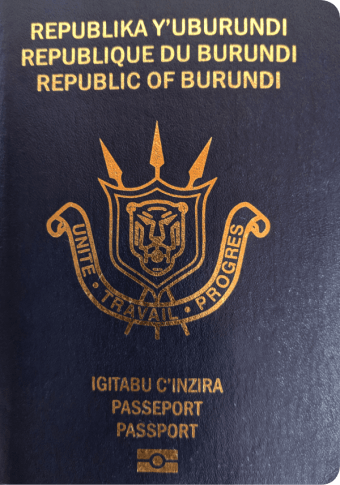 According to the SovSpot Passport Ranking Index, the Burundian passport is now ranked 94th. It allows visa-free travel to 49 countries. Visa-free travel and visa-on-arrival are available to Burundian passport holders in countries such as Indonesia, the Philippines, Singapore, and Serbia. Burundian nationals, on the other hand, need a visa to travel to 180 countries around the world, including China, Russia, the United States, and the European Union as a whole. Because of the high visa requirement, the mobility score is poor.