Burkina Faso is a landlocked former French colony. It has 45 provinces and is located in Western Africa. Ghana, Togo, Benin, Niger, Mali, and Côte d'Ivoire are its neighbors. The provinces of Centre, Boucle du Mouhoun, and Hauts-Bassins are the most important. With a surface area of 274,200 square kilometers, the country is Africa's 29th largest, making it one of the continent's medium-sized countries. There are three climate zones in the country: tropical savanna, tropical semi-arid, and hot desert. Its landscape is dominated by flat land. A total of 21.5 million people live in the country. Ouagadougou, the country's capital and most populated city, has a population of 1.4 million people. Bobo-Dioulasso, Koudougou, and Banfora are also prominent cities in the country. Thomas Sankara International Airport is the largest (OUA). It has a yearly passenger throughput of around 600,000 people. It connects the country to African and European locations, as well as France. It bears the name of Thomas Sankara, a well-known socialist revolutionary.

In 1960, Burkina Faso declared independence from France. Its culture is influenced by a blend of customs and French ancestry. The country is religiously diverse, with Muslims accounting for 61% of the population. French is the country's official language. Native African languages, on the other hand, are more extensively spoken. The legal system is founded on civil and common law in France. President Roch Marc Christian Kabore was elected as the country's chief of state in a presidential republic. As the leader of government, Christophe Dabire is the Prime Minister. Every five years, elections are held.

The West African CFA franc (XOF) is the country's official currency. Burkina Faso is a country with an open economy, with a GDP of around $45 billion. This places it as Africa's 21st largest economy. It has a $2,207 per capita income. Services and agriculture are the two largest contributors to GDP. Gold and cotton are two of the country's principal exports.

Burkina Faso is a growing tourist destination with a diverse range of attractions. It is well-known for its wildlife and historical landmarks. The capital, Ouagadougou, as well as Bobo Dioulasso, Aril National Park, Loropeni Ruins, and the Nazinga Reserve, are all popular tourist sites. The majority of the 150,000 tourists who visit each year come from nearby African countries as well as France. The government has set aside funds to help the tourist industry grow and diversify the economy. 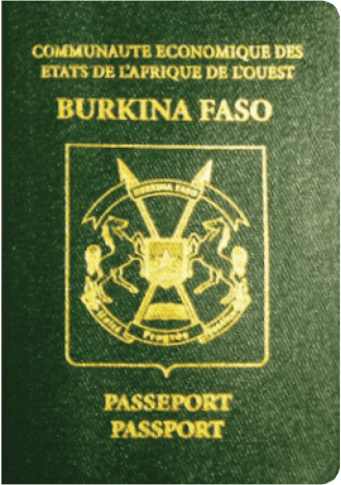 According to the SovSpot Passport Ranking Index, the Burkinabe passport is now ranked 85th. It allows visa-free travel to 59 countries. Visa-free travel and visa-on-arrival are available to Burkinabe passport holders in countries such as Indonesia, the Philippines, Singapore, Sri Lanka, and Iran. Burkinabes, on the other hand, need a visa to visit 170 countries across the world, including China, Turkey, Russia, the United States, and the whole European Union. Because of the high visa requirement, the mobility score is poor.