The heart of SE Europe

Geography & Mobility in Bosnia and Herzegovina

Bosnia and Herzegovina is a former Yugoslav republic made up of ten cantons. It shares its borders with Croatia, Serbia, and Montenegro in Southeastern Europe. Tuzla, Sarajevo, and Zenica-Doboj are the most important cantons. The country has a surface area of 51,129 square kilometers, making it one of Europe's medium-sized countries. Mountains and valleys dominate the landscape. With four distinct seasons, the climate is primarily Mediterranean and continental. There are 3.3 million inhabitants in the city. Sarajevo, the country's capital and most populated city, has a population of 275,000 people. Banja Luka and Tuzla are two other large cities. Sarajevo International Airport (SJJ) is the busiest, with 1.1 million passengers per year. This places it as the Balkans' 24th busiest airport. Sarajevo Airport serves the entire European Union and has strong flight connections.

The culture of Bosnia and Herzegovina is influenced by a combination of languages and Balkan cultures. Islam is the primary religion of 50% of the people. Bosnian, Serbian, and Croatian are the official languages. The legal system is based on civil law, with legislative acts being reviewed by the constitutional court. A parliamentary republic is the government type. The chairman of the council of ministers is the head of government. Every four years, presidential elections are held, with the president being elected directly by the people.

The Bosnian Convertible Mark (BAM) is the country's official currency. The country has an open economy, with a gross domestic product of $52.1 billion. The per capita income of its residents is $14,894. Agriculture, manufacturing, and tourism are the three main sectors that contribute to the GDP. Wheat, grain, steel, coal, and wooden furniture are Bosnia's principal exports.

Bosnia and Herzegovina has a wide range of tourist locations and attractions, both urban and nature. It is one of Europe's fastest-growing tourism destinations. Sarajevo, the capital, and Mostar are two of the biggest cities. The Doboj fortress, Tuzla's salt lakes, and the Tara river canyon are also worth visiting. Every year, roughly 1.8 million tourists visit the country. The majority of visitors come from Europe and the surrounding nations, making it a popular destination, particularly among regional travelers. 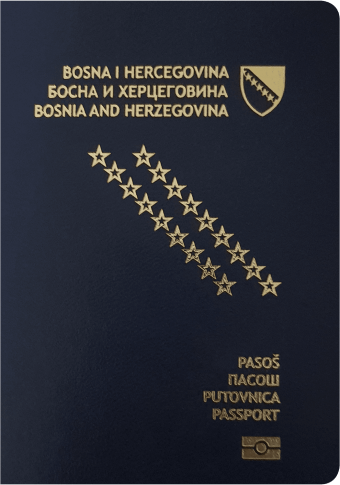 According to the SovSpot Passport Ranking Index, the Bosnian passport is now ranked 51st. It allows entrance to 119 countries without requiring a visa. This results in an overall mobility score of middling. Visa-free travel and visa-on-arrival are available to Bosnian passport holders in countries such as Brazil, Singapore, Turkey, and the entire European Union. This enables for practically instantaneous travel around the planet. Bosnian passport holders, on the other hand, need a visa to visit around 110 countries throughout the world. Australia, Japan, and India are among the countries that require a visa.