Belarus is a former Soviet republic with a landlocked population. It is divided into six administrative regions. Eastern Europe is the location of the country. Ukraine, Poland, Lithuania, Latvia, and Russia are all neighbors. Minsk, Gomel, and Mogilev are the most prominent administrative regions. Belarus covers 207,595 square kilometers of land. As a result, it is one of the former Soviet Union's smaller countries. Belarus is primarily flat, with a large number of marshlands. It has a climate that alternates between continental and maritime. There are 9.4 million people in the city. Minsk, the country's capital and most populated city, has a population of 2 million people. Gomel and Mogilev are two other large cities. Minsk National Airport (MSQ) is the largest airport, with 4.5 million passengers per year. Minsk Airport serves the entire former Soviet Union and beyond with strong flight connections.

Belarus's culture is heavily affected by the country's soviet past. Although Orthodox Christianity is the predominant religion, more than 40% of the population is atheist. Russian and Belarusian are the official languages. Civil law is the legal system. A presidential republic is the government type. President Aleksandr Lukashenko was elected, and Prime Minister Roman Golovchenko is in charge of the cabinet. Every five years, presidential elections are held, with the president being elected directly by absolute majority.

The Belarusian Ruble (BYN) is the country's official currency. The economy of the country is open, with a GDP of around $200 billion. The per capita income of its residents is $21,223. Industry and services are the two main sectors that make up the GDP. Russia and the European Union are Belarus's most important export partners. Oil, lumber, peat, grain, and machinery are the key contributors to its GDP.

Belarus boasts a range of urban and natural tourism destinations and attractions, and the GDP has been on a small increase trend in recent years, with annual growth rates of 1%. It is well-known for its huge natural beauty and many cultural attractions. There are four UNESCO world heritage sites in the country. The capital Minsk, the Braslav Lake Area, the Pushcha national park, the famed Mir Castle, the Brest Fortress, and the city of Grodno are just a few of the significant sites. Every year, roughly 365,000 tourists visit the country. The majority of visitors come from Russia and Europe. As a result of the lack of a visa requirement, it is a very popular location for regional travelers. 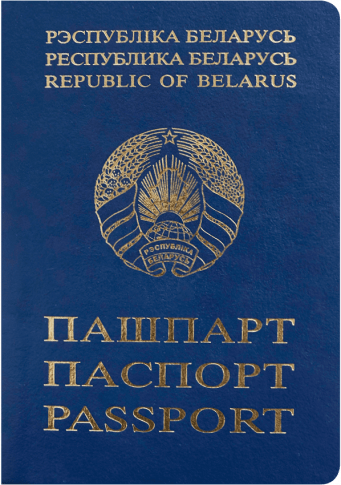 According to the SovSpot Passport Ranking Index, the Belarusian passport is presently ranked 67th. It allows people to travel to 79 countries without needing a visa. Overall, it has a medium-low mobility score. Visa-free travel and visa-on-arrival are available to Belarusian passport holders in countries such as Brazil, Russia, China, and Turkey. Belarusian citizens need a visa to travel to over 150 countries across the world. The United States, the European Union, and Japan are among the countries that require a visa ahead of time.