Bangladesh is a former British colony in Southern Asia that is divided into eight divisions. It shares land borders with India, Myanmar, and the Bay of Bengal. Dhaka, Chittagong, and Rajshahi are the most important divisions. The country covers a total size of 148,460 square kilometers, with low plains dominating the landscape. It has a tropical climate with a wet monsoon season. There are 161 million people in the country. Dhaka, the country's capital, is also the country's most populous city, with over 21 million people, followed by Chittagong and Khulna. Shahjalal International Airport (DAC) is the largest airport, with an annual passenger volume of around 8 million passengers. The airport is named after one of Bangladesh's most prominent Sufi saints, Shah Jalal. The airport services the majority of the region, with flights to Europe and the Middle East on occasion.

With 90 percent of the population being Muslim, Islam dominates Bangladeshi culture. Bangla is the official language. The legal system combines civil law and Islamic sharia law. A parliamentary republic governs the country. All divisions have regional governments that subordinate to the central government.

The Bangladeshi taka is the official currency (BDT). The country has an open economy, with a GDP of $864 billion dollars, making it the world's 29th largest economy. The average household income is $5,209. The services and industrial sector accounts for the majority of the GDP. Above the last few years, the GDP has been consistently increasing at a strong rate of over 7%. Clothing, shoes, and agricultural products are Bangladesh's main exports.

Tourists can visit the country's many natural and culturally unique sites. Bangladesh is home to three UNESCO world heritage sites, two of which are cultural and one of which is natural. The Sundarbans Mangrove Forest, the Chittagong Hill Tracts, Rangamati, Cox's Bazar (the world's longest uninterrupted coastline), and Bagerhat's Mosque City are among the most popular tourist spots. Dhaka, the country's capital, also has a number of museums and exhibitions dedicated to the country's history and natural beauty. 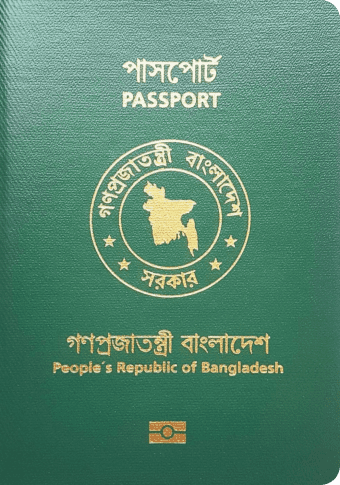 According to the SovSpot Passport Ranking Index, the Bangladeshi passport now ranks 104th. It is regarded as one of the world's lowest-ranking passports. Only 39 countries offer visa-free entry to Bangladeshi passport holders, including Indonesia, Dominica, Madagascar, and the Seychelles. A Bangladeshi passport holder is required to obtain a visa for 190 places before going. The passport raking is low on the overall global mobility score because of this. Bangladeshis must apply for a visa in advance for key destinations such as the United States and the European Union. Applicants must show documentation such as evidence of funds and a return airline ticket when applying for a visa.