Beats to your rhythm

The Argentine Republic is the world's eighth largest country, with 23 provinces. Buenos Aires, Córdoba, and Santa Fe are the most important provinces. The country is located in South America and shares borders with Uruguay, Paraguay, Bolivia, Brazil, and Chile. With a total size of 2.7 million square kilometers, Argentina is the second largest country in South America. It has a mainly moderate climate. In the southeast, however, it is arid, while in the southwest, it is subantarctic.

It has a population of 47.7 million people, making it South America's third largest country. Buenos Aires, the country's capital and most populated city, has a population of 2.8 million people. Córdoba and Rosario are the next cities on the list. Buenos Aires Ministro Pistarini Airport (EZE) is the largest airport, with 13 million passengers per year. With 12 million passengers per year, Aeroparque Jorge Newbery (AEP) is the country's second busiest airport. Both airports serve domestic and international services that connect Argentina to the rest of the world. Argentina's culture is shaped by the country's history of immigration waves over the centuries. In most of the country, there is a multi-cultural and religious mix, with Roman Catholicism predominating. Spanish is the official language. The European Civil Law underpins the legal system. A presidential republic is the government type. The elected President serves as both the president of state and the head of government.

The Argentine Peso (ARS) is the official currency, which has a reputation for being extremely volatile. The country has a generally open economy (albeit most businesses are subject to capital controls), with a GDP of $903 billion, making it the third largest in South America. Its people earn an average of $20,055 per year. The GDP is mostly composed of three primary sectors: services, industry, and agriculture. Soybeans, corn, beef, wheat, and textiles are among the most important export items.

Argentina is known for its enormous natural beauty and coastline that stretches all the way to the continent's southernmost point. The Iguaz Falls, the Perito Moreno Glacier, Tierra del Fuego, and Ushuaia are just a few of the important destinations. Every year, approximately 7 million tourists visit the country, the majority of which are from Europe, North and South America. Argentina is now the fourth most visited country in the Americas. 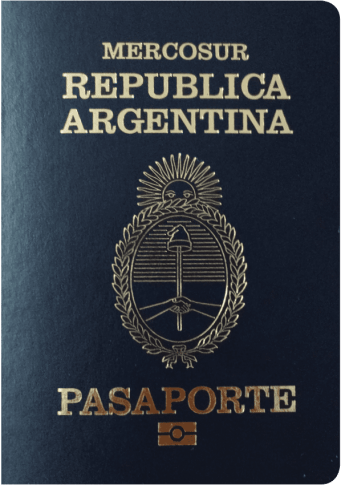 There are several residency options for Argentina. Citizenship can be obtaines after having lived in the country for 5 years or more by appointment with a judge. The applicant must show to have established in the country a new industry, introduced a useful invention or made any other action to mean a moral or material advancement Republic and must show clear ties to the country (spouse, primary residence etc).