Algeria's People's Democratic Republic is divided into 58 provinces. It is found in the Maghreb region of North Africa. Morocco, Mali, Mauritania, Libya, Niger, and Tunisia share boundaries. Alger, Sétif, and Oran are the most important provinces. The overall size of the country is 2,381,741 square kilometers. High plateaus and deserts dominate the landscape. It has a primarily arid to semiarid climate. It has a population of 44.7 million people, making it Africa's ninth largest country. Algiers is the country's capital. With a population of nearly 3 million inhabitants, it is also the most populated city in the country. Algiers Houari Boumediene Airport (ALG) is the largest airport, with an annual passenger volume of about 7 million people. Former President Houari Boumediene is honored with the airport's name. It also houses Air Algérie and Tassili Airlines, the country's national carriers.

Islam is the dominant culture in Algeria. Ninety-nine percent of the population is Muslim. Arabic and Berber are the official languages. The legal system combines French civil law and Islamic sharia law. A presidential republic is the government form. Abdelmajid Tebboune is the current president-elect. Regional governors are appointed by each province and report to the Minister of the Interior. Towns have a democratically elected assembly to represent them.

The Algerian Dinar is the official currency (DZD). The country has an open economy, with a gross domestic product of $684 billion. The average household income is $15,765. The services industry and agriculture account for the majority of the GDP. It boasts Africa's second-largest oil reserves and the world's 16th-largest. Petroleum, natural gas, wheat, barley, grapes, and olives are Algeria's most notable exports. The majority of these products are sold to neighboring countries and the European Union.

Tourists can visit the country's many natural and culturally unique sites. Seven UNESCO world heritage sites are located throughout the country. These locations range from remote deserts to Kasbah's bustling streets. Atakor, Oran, Constantine, and Timgad are among the most popular tourist spots. Algiers, as the country's capital, also has excellent museums and exhibitions showcasing the country's history and natural beauty. 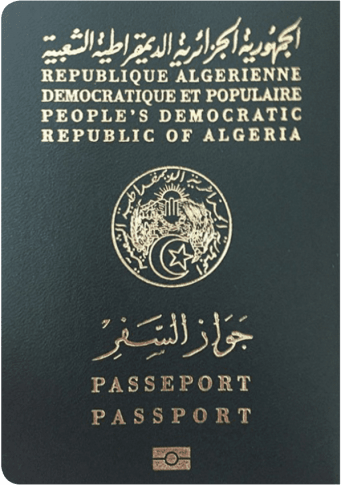 According to the SovSpot Passport Ranking Index, the Algerian passport is presently ranked 93rd. It is regarded as being on the bottom end of the world's Passport Rankings. Only 51 countries offer visa-free entry to Algerian passport holders, including Indonesia, Malaysia, Iran, and Dominica. An Algerian passport holder is required to obtain a visa for 178 places before traveling. The passport raking is low on the overall global mobility score because of this. Algerians must apply for a visa in advance for key locations such as the United States and the European Union. Applicants must show documentation such as evidence of funds and a return airline ticket when applying for a visa.