Regardless of place of birth, Switzerland recognizes the acquisition of Swiss citizenship by paternal or maternal descent, known as jus sanguinis.

Swiss passports are ranked as some of the best passports in the world, thanks to the high mobility they provide in terms of visa-free access.

A Swiss passport can be obtained through descent, marriage, or by staying in the country for a particular period of time. However, the naturalisation process can be lengthy and complicated.

Eligible candidates can apply for Swiss citizenship at the Swiss federal government or by official decision of the competent authority.

The application procedures for those residing abroad, as well as information on dual citizenship, are provided at the bottom of this article.

Unlike in many other nations, a newborn born on Swiss soil does not automatically acquire Swiss citizenship. If the child meets the following criteria, he or she will be Swiss:

The Swiss voted in 2017 to make it simpler for third-generation immigrants to get Swiss citizenship through naturalization procedures. More information can be found here.

How to Apply for Naturalization by Birth or Descent

If you match the conditions for applying for Swiss citizenship by birth or ancestry, you will be eligible for the streamlined naturalization process. The particular procedure will be determined by your canton.

The application process might take up to 12 months and can be done through the SEM or your local canton. In addition to meeting the birth/descent criteria, you must provide evidence of:

To verify your eligibility, you must submit an application form along with several statements and questionnaires. The application fee for adults is currently CHF 600. Children under the age of 18 can apply for free, unless the applicant has a Swiss father who is not married to the applicant’s mother. The charge in this situation is CHF 350. 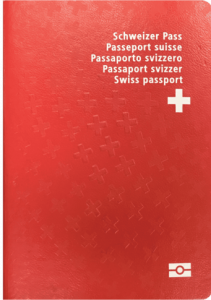 Swiss born children do not instantly obtain Swiss citizenship, unlike in classic immigration countries such as the United States and Australia that work with jus soli.

Those who are not qualified for simplified naturalization can apply for Swiss nationality through conventional naturalization after ten years of continuous residence in Switzerland. Anyone who meets the residency criteria and holds a C residence permit is eligible.

Years spent in Switzerland between the ages of 8 and 18 count double, which means that persons under the age of 18 can apply for Swiss citizenship after five years if they meet other requirements.

If you seek to become Swiss citizens as a couple, you must both fulfill the 10-year minimum. If one of the couple becomes a citizen before the marriage, the partner married to a Swiss spouse is eligible for citizenship after five years of Swiss residence and three years as a spouse.

You must apply for citizenship via ordinary naturalization at three levels of Swiss authorities: confederation, canton, and commune. While federal standards are the same for all candidates, they vary greatly between different cantons and communes.

Some cantons or communes, for example, may allow brief periods of time spent living outside Switzerland within the residency requirement term, while others may not.

Some may also apply separate criteria to nationals of the EU and the European Free Trade Association (EFTA). Your canton’s requirements for obtaining Swiss citizenship can be found here.

Dual nationality is unrestricted in Switzerland, so any Swiss citizen is allowed to obtain as many passports as he/she chooses.

However, nationals of certain nations may lose their original nationality if their home country’s law prohibits dual citizenship and they plan to become Swiss citizens.

In summary, according to Swiss law individuals can lose their Swiss citizenship in four ways:

For a non Swiss citizen or Swiss national alike, the following sites might be useful when starting the Swiss nationality journey:

BowTiedMara is paving the mobility asset highway for the Sovereign Individual and writes about mobility options in the Digital Age and Latin American history on Substack and SovSpot.com. You can also contact Mara directly on Twitter.
PrevPrevious10 Best African passports
NextUkrainian citizenship by descentNext
Get The Latest Updates