No, you shouldn’t buy a fake passport on the black market

How to obtain one legally while avoiding scammers

There are two paths to citizenship: legal and “gaining the system”. Long story short: not recommended and this can definitely be the worst rug pull of your life. This resource will give you a good idea of pricing on the dark web for a range of fake documents, including passports.

Fraudsters offer to purchase a passport in violation of the laws of multiple states at the same time. Buying these is a tricky game, with risks ranging from substantial fines and a restriction on entry into EU nations to criminal culpability and compromising evidence.

We’ll show you how to get a passport without getting scammed and how to avoid mistakenly entrusting your money and reputation to scammers.

What methods do scammers offer to obtain a second passport?

Scammers promise to help you become a citizen of another country swiftly and legally. They frequently promise to assist in obtaining a Romanian, Hungarian, Czech, or Greek passport. If the regular procedure for getting citizenship takes months or years, scammers promise that their client will be granted citizenship in a matter of months.

The Slovenian government has warned about these types of passport scams: 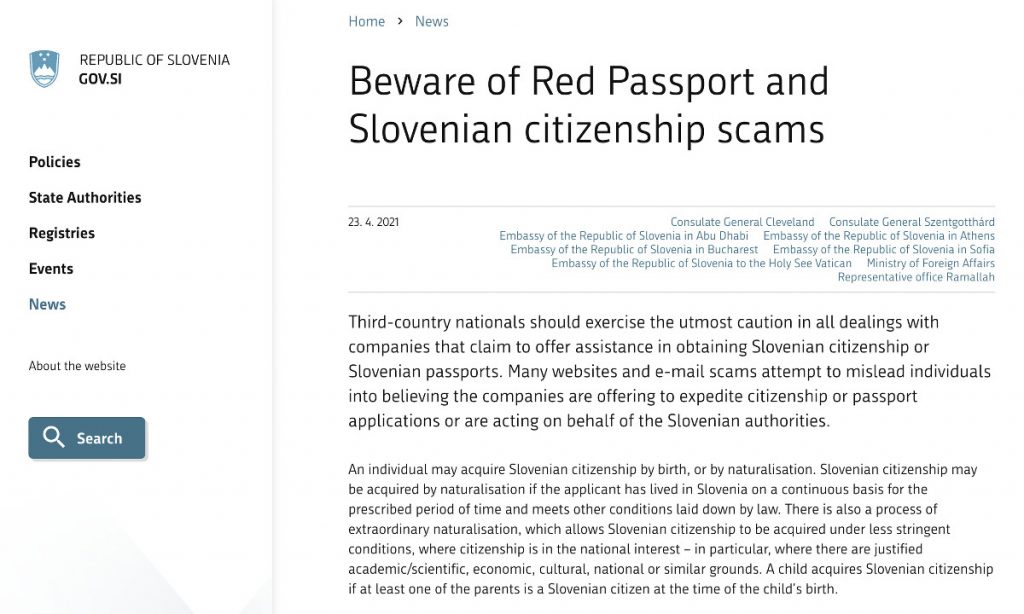 Fraudsters use vague references to ties with powerful individuals, promise to bribe officials, or falsify records in archives. These tactics are ineffective and can lead to serious consequences.

Every year, states tighten the laws and more closely supervise the process of getting citizenship. In Hungary, for example, 370 criminal charges were initiated in 2020 as a result of document fraud when applying for citizenship. And now the US announced it will not allow ESTA visas for Hungarian citizens born outside of Hungary, because of the massive amount of fraudulent cases.

Scammers typically employ one of three methods: identity fraud with a phony passport or ID, non-existent relatives, or a fictitious marriage with a fake marriage certificate. We’ll go over why activities like creating false passports are risky.

The company locates locals who are willing to “sell their identities.” A figurehead fills out paperwork for a passport. However, a company client arrives to submit biometrics, fingerprints, and photographs.

When someone checks the document or begins to use it, deception is revealed. This can result in administrative or criminal penalties.

If you or a member of your immediate family was born in the country, you may be eligible for citizenship by descent under a streamlined procedure in several countries. This is a valid method that scammers are attempting to employ.

The client is told that he would “discover” his Romanian or Bulgarian ancestors. The “lawyers” stop speaking once the money has been received and the procedure of gathering documents has commenced.

Foreigners are sometimes instantly provided the opportunity to fabricate a birth certificate in order to confirm non-existent family relations with a citizen of the country. This approach is untrustworthy since all documents are meticulously scrutinized, and false certificates and certifications are easy to detect.

Customers of such enterprises face harsh consequences, including expulsion from the nation, a prohibition on visiting EU countries, penalties, and criminal prosecution.

Each country has its own procedure for obtaining a passport for people who marry a citizen of that country. Most of the time, acquiring citizenship will take time: you will need to live in the nation for one to several years, pass a language and history exam, and demonstrate integration into society.

Passport through fictional marriage and other illusions about EU citizenship are among the top ten most common misconceptions regarding EU membership.

For example, in Germany, you must be married for three years before applying for citizenship. Officials investigate whether the spouses truly live together and share a similar life. If the lie is discovered, the marriage is canceled, and the violation may be deported.

Detours to citizenship usually result in a loss of time and money, and in the worst case, criminal culpability and the inability to travel to the European Union. In Romania, for example, falsifying paperwork can result in up to three years in prison.

How to Get a Second Passport Legally

Citizenship can only be earned legally, such as by proving kinship with EU citizens, completing the naturalization process after getting a residency visa, or investing in the country’s economy.

The minimum investment required for citizenship by investment is $100,000. The required bundle of documents, fee, and terms are determined by a country’s legislation.

Ancestry provides a second passport Citizenship by descent is attainable in several nations if the applicant’s parents or grandparents are citizens of the country. You must first authenticate the relationship. The original birth certificate and a copy of the relative’s passport are usually required.

After marrying a citizen of the country, you can obtain a passport. The terms and circumstances differ from one state to the next.

4. Naturalization results in a second passport.

If you reside in the country legally for an extended period of time, such as for employment or study, you can get citizenship through naturalization.

Naturalization as a path to citizenship

Naturalization normally happens in phases. The candidate first receives a visa, followed by a temporary residence permit. They can then apply for permanent residence and then citizenship.

The reasons for acquiring a residency permit differ: Studying at a local institution, working for a firm, or volunteering for humanitarian groups are all possibilities. Other option are marriage to a citizen of that country; investment in real estate, the economy, or company in that country.

In some nations, investors can apply for a residency visa or citizenship through government initiatives. To participate in such a scheme, you must invest in real estate, funds, cultural heritage preservation, or develop a business in the country and generate jobs.

Direct investment might result in Maltese citizenship in exchange for excellent services. The initial investment is €690,000.

Citizenship in the Caribbean permits you to access Schengen nations and the United Kingdom without a visa, and Dominica and Grenada passports also allow you to enter China without a visa.

$150,000 is the average investment for Caribbean citizenship.
Under the investment program, it is possible to obtain a second passport in the Caribbean countries in 3 to 6 months. You can get a Vanuatu passport even faster: the process takes about a month on average.

The minimum investment ranges between $100,000 and $200,000. Investments can be recovered after 4 or 5 years in specific instances.

Depending on the country, the applicant’s parents, spouses, children, and, in rare situations, siblings and sisters may also be granted citizenship.

In most situations, obtaining citizenship in a Caribbean country does not necessitate permanent presence in that country, hence there is no need to relocate. You can, however, freely travel and visit the country at any time.

All documentation for citizenship can be filed online; there is no need to visit the country in person.

In the European Union, a second passport is required. Most EU countries will not allow you to make an investment and then become a citizen (exceptions are Malta and Montenegro). To begin, you can apply for a “golden visa,” which is a residence permission for investors. An investor can obtain such a status more quickly than a conventional residence visa because it does not need permanent residency in the country.

The rules for acquiring a residence permit in the EU and the amount of investment vary depending on the country.

Where in Europe can you obtain a residence visa through investment?

With a second passport, you can travel to EU countries without a visa.
A second passport allows you to freely travel throughout the Schengen area, expand your business internationally, study at European universities, and relocate to a warmer environment.

Applying for a second passport on the black market might result in fines, exclusion from the European Union, and perhaps criminal charges.

In the EU and the Caribbean, you can obtain a second passport legally by completing the naturalization procedure from a resident permit to citizenship or by engaging in investment programs.

Check out the filter tools on our site to find the best program for you. We list everything (except for marriage or work visas), including Digital Nomad visas.

BowTiedMara is paving the mobility asset highway for the Sovereign Individual and writes about mobility options in the Digital Age and Latin American history on Substack and SovSpot.com. You can also contact Mara directly on Twitter.
PrevPreviousThe pros and cons of the Global Entry program
NextThe meaning of “Country of Residence”Next
Get The Latest Updates